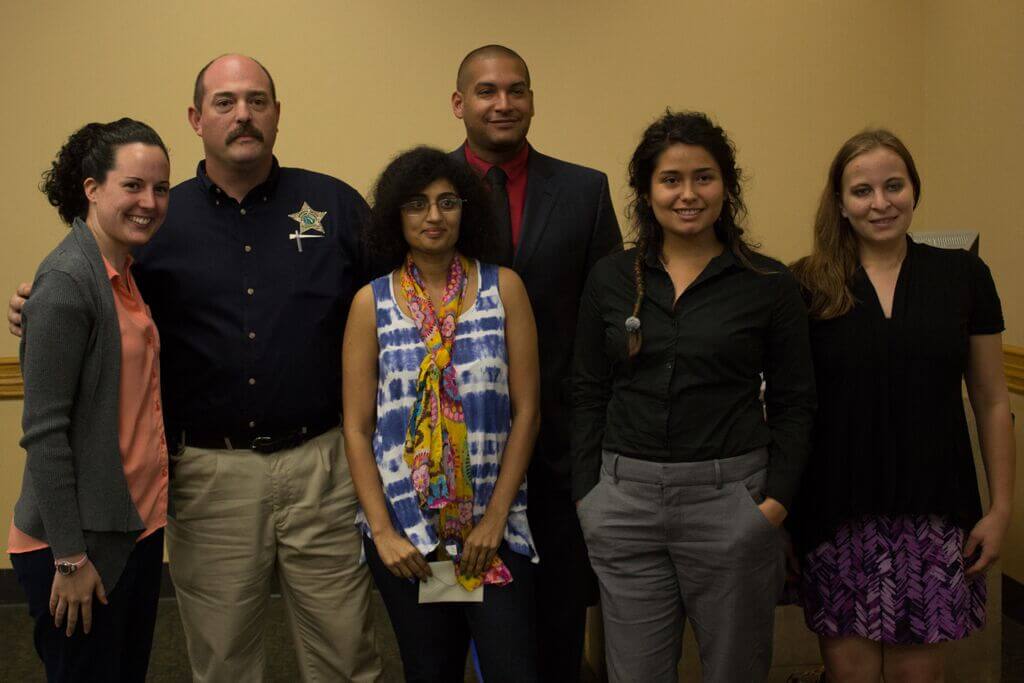 Today, a person’s natural response to American slavery is that it no longer exists. Slavery is in the past. It was the abuse and forceful servitude of Africans and their descendants in the 1600s-1800s. Slavery is a hugely historical trauma, but to say it doesn’t exist today is highly incorrect.
Today, slavery exists in the form of human trafficking.
Rachel Brown and Coral Martin of FGCU’s Impact Christian Campus Fellowship, in addition to student Victoria Kelly, have been working with the newly established on-campus Human Trafficking Resource Center to bring the university more awareness and informative events. “Enslaved,” which took place Monday night in the Cohen Center ballroom, was the first of these co-hosted events. Local charities, volunteers, speakers and other advocacy groups attended to bring light to the dark commercial sex industry.
Brown and Martin started work on the project as a community service project for their Wednesday night women’s group. The group began their work last spring with the HTRC. With help from Kelly and the resource center, “Enslaved” came to life as a team effort. Volunteers from Chi Alpha also played a part in setting up the event.
Human trafficking — modern-day slavery — comes in many forms. It can be through labor, domestic servitude, sex and more. It’s the exploitation of people through the use of force, fraud or coercion.
“It’s happening all around you. It’s not just in Atlanta, Miami, New York,” said Alex Olivares, a presenter at the program.  “It’s right here.”
Human trafficking occurs everywhere. In March, The News-Press reported that 15 of 17 suspects in a case that opened in 2013 had been arrested for human trafficking. The case spanned five counties, and it was centered right in FGCU’s backyard, Estero.
Another case opened recently due to a Craigslist advertisement targeting FGCU students. Mentioned by Olivares in his presentation, this ad aimed to assist students “of need” by a “SWM [single white male].” The ad called for a student between the ages of 18 to 24 of any race, orientation and gender requesting a public meeting to discuss details.  This has been reported to the authorities and details have not been released.
The threat of human trafficking is very real. It may not occur in the open as rumors discuss, but the Florida Coalition Against Human Trafficking’s official website states, “Florida has been identified as a hub for human trafficking activity, citing one of the highest incidences of human trafficking in the country.” Not surprising given that two Florida cities rank in the top 10 cities for human trafficking; Miami comes in at No. 8 and Tampa at No. 2, Olivares said.
The best thing to do is be an advocate. Get educated, get involved and be aware. Do not investigate any suspicions; instead, report them to a local sheriff. Call 911 if in immediate danger.
For more information on human trafficking and the on-campus HTRC visit its official website. The HTRC is also offering internships and other service learning opportunities. For inquiries, contact the HTRC Coordinator Alex Olivares at aolivares@fgcu.edu.
The FGCU HTRC can also be found on Facebook at “Human Trafficking Resource Center at FGCU.”

Aiden Strawhun, infamously known as “Ginger,” is a sophomore at FGCU majoring in journalism and minoring in creative writing. Originally hailing from Nixa, Missouri, Aiden has joined Eagle News to be the ultimate word nerd. When she’s not writing or editing, she can be found binge gaming on the latest releases or drowning her sorrows in Asian cooking.