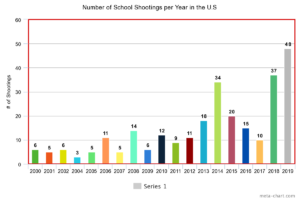 Chart created by Yaritza Rivero. School shootings over the past 19 years in the United States. Information obtained from NBC and CNN.

On Feb. 14, 2018, 17 victims were gunned down at Marjory Stoneman Douglas High School in Broward County, Florida. The victims included students, faculty and staff.

It was broadcast nationwide and is described as one of the worst school shootings in United States history.

“I just remember feeling so helpless. I had just lost my best friend, and he was only 15 years old. I cried for days, and I just felt so scared that I could barely think and didn’t want to leave my house,” said Brandon Dietrich, a now 17-year-old who was at MSD during the shooting.

The U.S. is no stranger to school shootings. Broward County schools, along with schools across the nation, practice “Code Red” drills at least once a quarter to ensure that students know what to do in that type of situation. Code Red means there is an immediate and imminent threat to the school. Typically, this means an intruder, including active shooters, is in the school building.

“I was at school when we had gone into a Code Red, and after finding out what had happened, I messaged all of my friends that went to MSD because I lived a few minutes away,” said Alexandra Taylor, who now attends FGCU. “Thank God they were all okay but hearing the stories of the families that lost someone was tragic.”

After the MSD shooting, Broward County was in a state of shock, and many parents did not send their kids to school for days.

In the aftermath, the March for Our Lives movement began. Schools hosted walkouts in protest of the current gun laws. People traveled to Washington D.C. to march in front of public officials’ offices. MSD students spoke out about the incident on national television and wrote the book “Parkland Speaks: Survivors from Marjory Stoneman Douglas Share Their Stories.”

Some progress has been made on a state level.

Anyone in Florida is able to possess a rifle at 18 and purchase guns at 21 with few screening processes. Prior to Parkland, 18 year olds could buy rifles. The state does not require a specialized permit to buy a firearm, and background checks are only done by federally licensed gun sellers.

In Florida, Unlicensed sellers often sell at gun shows and aren’t required to do background checks; this is referred to as “the gun show loophole.”

Just last month, a Republican-led senate panel voted on a bill  (SB 7028) that would require background checks and a three-day waiting period for firearms sold “on property to which the public has the right of access,” such as “a flea market, a gun show, or a firearm exhibit.” The bill still must pass the house and avoid being vetoed by the governor.

Graphic made by Kris Locker. The graphic was created based on a picture that Jackery Bart submitted of him at the March on Washington.

“Being a part of the Washington D.C. march was life changing because I saw so many different types of people coming together for an important cause to change gun laws,” said Jackery Bart, who attended high school in Broward County and is now an FSU student. “It was just nice to know that we got our voices out.”