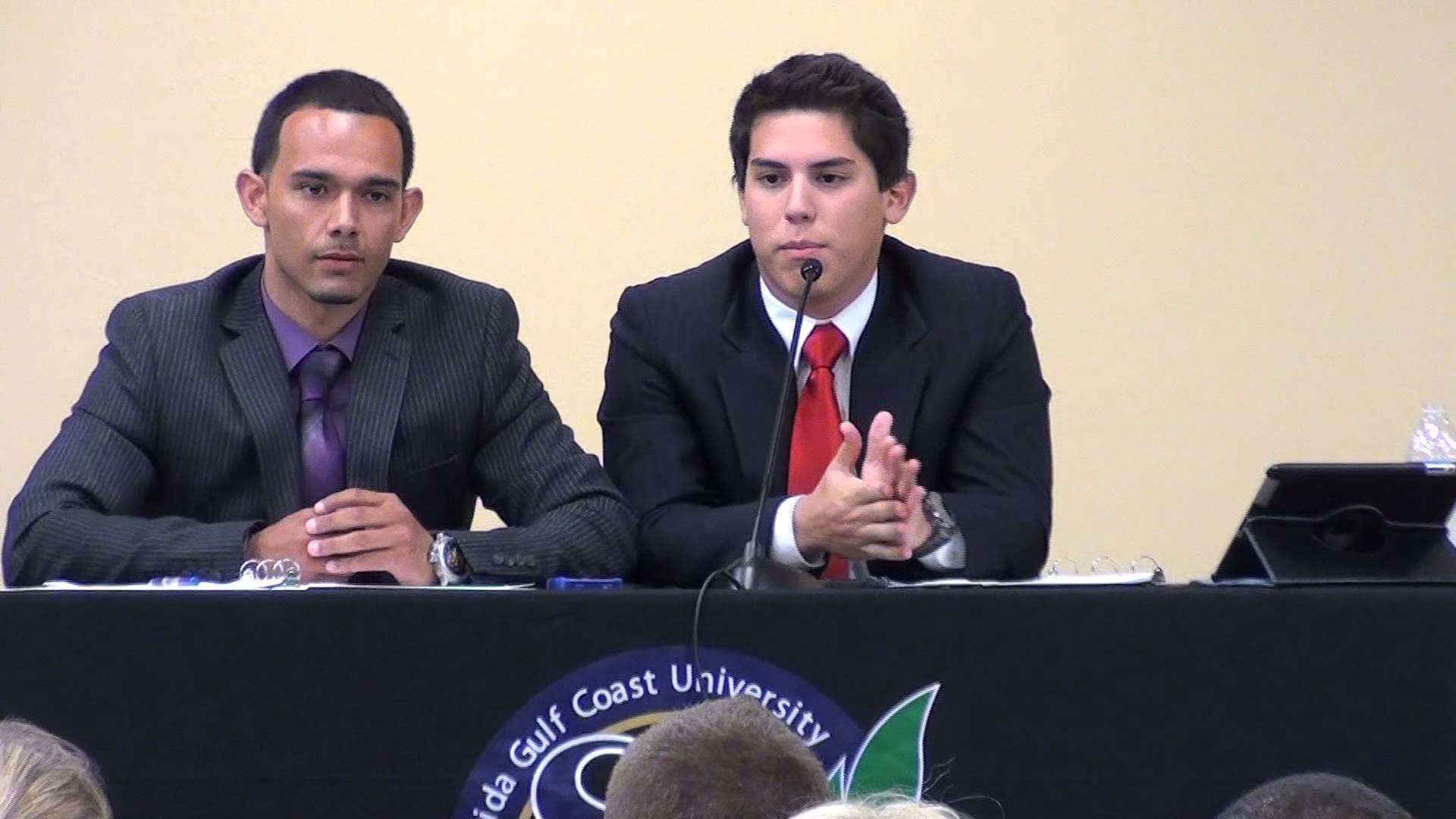 There was a war of words in the Cohen Center ballroom as the Student Government presidential and vice presidential candidates debated Thursday night.

The debate started with questions for both parties about football and the feasibility of the sport.

In response to President Wilson Bradshaw’s statement that football won’t happen at FGCU in the foreseeable future, Pelliccioni said the Engage party is willing to continue discussing the topic.

“We can’t promise it’s going to happen this year,” Pelliccioni said. “Continuing that conversation is the best way we can move forward from here.”

The Y.E.S. party also addressed its party’s platform of opening an on-campus barbershop and movie theater.

“It’s definitely feasible,” Cubillo said. “I know there is a high demand, especially with the male population for a barbershop, so why not try it.”

Cubillo also added that if the barbershop were to be created, students would be hired first.

Each parties also addressed weaknesses in its own platform.

Despite promising to continue the conversation, Ferguson said the biggest weakness in the Engage party’s platform was football.

Cubillo said the biggest weakness in the Y.E.S. party’s platform is that its goals may seem too short sighted.

“Some of the items may be short term, but that is because we are not going to waste your time,” Cubillo said. “We want to have a platform that you can say a year later that ‘hey they did most of that’ or ‘they did all of that.’”

Once it was time to address the opposite party’s platform, Cubillo said there was a number of items on his opponent’s platform that are flawed.

“Where do I start?” he said. Cubillo then listed the items on the Engage party’s platform
that are “already done,” such as providing transportation to select away games, providing service learning hours and creating a bike rental program.

Pelliccioni said he was more preoccupied about what the Engage party will offer students than the Y.E.S. party’s platform.

“I’m more concerned about what we’re going to be providing to the students and not what they’re platform has to offer,” Pelliccioni said. “I’m not really interested in having a debate about their platform.”

Questions from the approximately 80 students in attendance were also accepted.

One question asked the candidates to define FGCU.

As the first candidate to respond, Pelliccioni said FGCU is represented by its community engagement.

“Defining it is something that, I think, incorporates leadership and service, being involved on campus,” Pelliccioni said. “Truly being able to see the way the university has been and the future, where it plans to go, I think it incorporates all of those and that’s what it takes to be an FGCU Eagle.”

Vargas answered for the Y.E.S. party saying FGCU’s growth is beneficial to students.

“To me, FGCU is the fastest growing university with enormous amounts of opportunities to get involved and succeed in the real world once we graduate,” he said.

Student Government election polls will be open from 9 a.m. to 6 p.m. today and 9 a.m. to 5 p.m. on Thursday in the Cohen Center.

Results will be announced at Spirit Day, which will take place Friday from 11 a.m. to 2 p.m. on