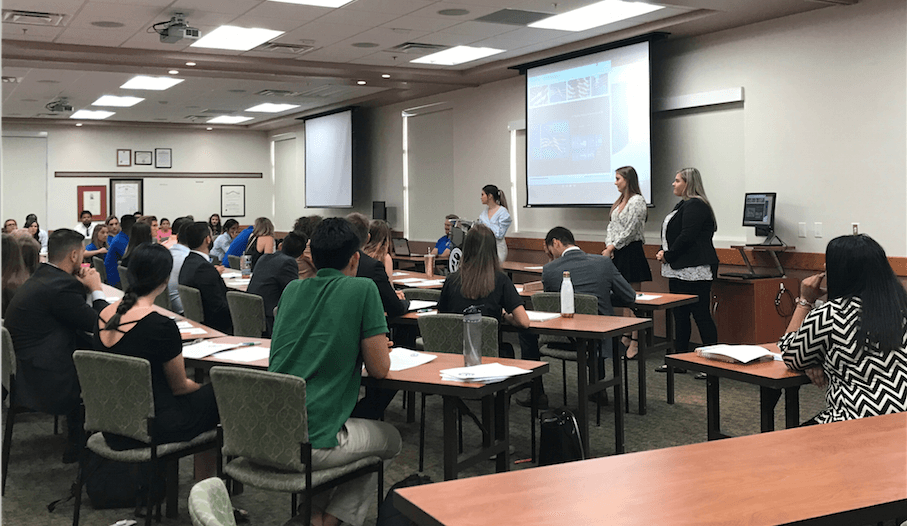 Parsons and Held accepted their nominations, while Cooney declined his.

Parsons, who currently serves as the reference chairman of Tri Delta and an Emerging Eagles Mentor along with her involvement in SG, shared a five step plan with senators while presenting her candidate packet to the crowd.

Parsons also wants to create a service retreat for senators.

“I think she would make a great senate president,” senator Tony Guarino said.

Held, who serves as the university relations chair for senate and works for the Office of Alumni Relations, wants to implement educational programs for senators, ad hoc committees for issues that the senate wants to take action on, and increase senate participation.

“I feel very confident in my knowledge of Student Government,” Held said during her presentation.

After senators spoke on behalf of the candidates and a question and answer session was held, Parsons was elected.

Her work as senate president started right after her election, as she was responsible for electing the pro-tempore.

Three senators were nominated for the position — Esteban Tavel, Anne Slominski and Cooney.

Tavel, who also serves as a resident assistant in Everglades Hall in South Village, said that he felt that his passion for FGCU and its students made him ready for the position.

Cooney, who served as the vice chair of the senate travel committee as well as the vice president of programming for his fraternity, Sigma Phi Epsilon, felt that his experience in senate made him qualified.

Slominski, a member of Kappa Delta, wants to increase senate retention rates as well as inclusiveness within senate.

After senators spoke on behalf of the candidates and a question and answer session was held, Slominski was elected.

Only one senator was nominated for senate secretary, Gabriella Giordano.

Giordano wants to be “very objective” in senate executive meetings, implement a reminder text service for senators and create a monthly newsletter.

After senators spoke on behalf of the candidates and a question and answer session was held, Giordano was elected.