Students and staff come together to mourn Orlando shooting victims 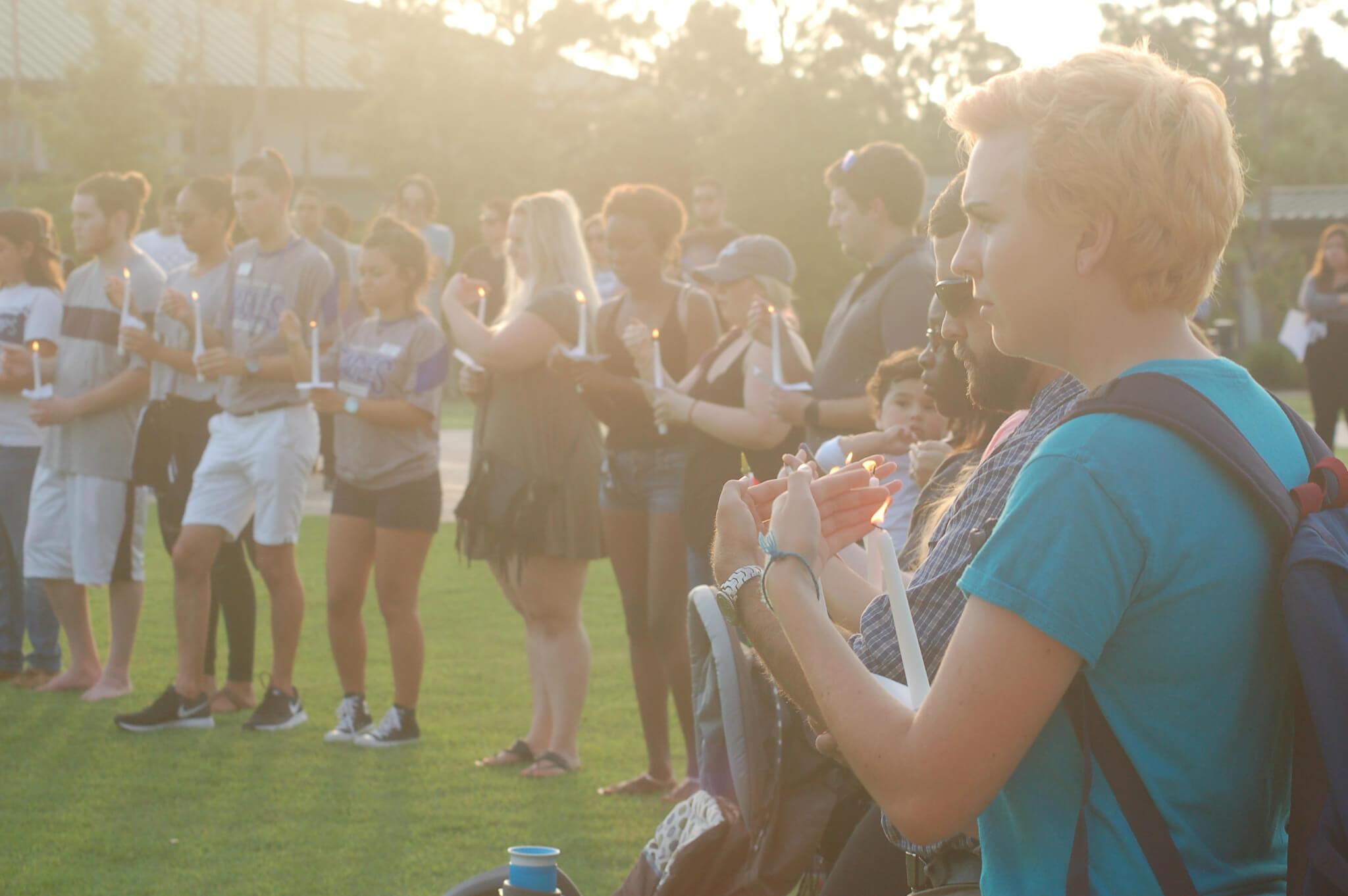 The Veteran’s Pavilion transformed into a place of mourning on Tuesday, June 14 when the Dean of Students’ Office held a vigil in remembrance of the victims of the shooting at Pulse nightclub in Orlando on Sunday, June 12.

At 7 p.m., students, faculty and staff gathered on the library lawn in front of the Veteran’s Pavilion. President Wilson Bradshaw spoke, sharing a heartfelt message with the crowd.

Bradshaw stated that he has been receiving numerous emails from people across the country affected by this tragedy.

“We need to continue to show our support and solidarity and our love for each other,” he said. “Thank you all for being here. Thank you for the outpouring of emotions.”

After Bradshaw’s speech, a candle was lit in honor of those still in the hospital recovering from the attack; another was lit in honor of the families of the victims, and an additional 49 candles were lit for each victim who lost his or her life during the tragedy. Students who wished to participate in the candle lighting held one candle, representing one victim. The candles were lit one by one as the name of the victim was shared with the crowd.

Representatives from Counseling and Psychological Services were on hand during the event, ready to speak to individuals who felt they could benefit from their services.

Delores Kiesler, the Director of Student Support Services under the Dean of Students’ Office, said that the vigil only consisted of one speaker to not draw attention away from the victims.

“We knew that we didn’t want a lot of speakers to take attention away from the victims,” Kiesler said. “We really wanted to focus on victims and those that are suffering. We knew that we wanted President Bradshaw to say a few words as he did but mostly have the rest of the time just to recognize who they were.”

“I know that we have students that go up there all the time,” she said. “This is so regional. They probably hang out with University of Central Florida students. We know that some of our students go to grad school up there. There’s just a number of connections, and we wanted to let the students here know the connection.”

Kiesler then said there will most likely be another vigil in the fall when more students are on campus. While there were no FGCU students killed in the attack, the university is unsure if any of those who are currently hospitalized are enrolled.

“As we are finding out the names of people, we are checking the list making sure they are not our students,” she said.

Jake Eveker, a junior theatre major, attended the vigil because they are a member of the queer community and felt deeply affected by the attack.

“Being a queer person, it’s important for me to be a part of this and grieve for it and have the time to mourn,” they said. “This is a part of that process for me.”

Eveker said that it’s important for FGCU students to show their support because those who were targeted were similar to the student body of FGCU.

“There really isn’t that much of a differentiating point between us and them,” Eveker said. “They’re our age; they’re our demographic. We have a large number of Latino queer people here, and we can’t ignore something like this.”

Eveker said that they will express their grief and feelings through art.

“It’s important for me to do things and make something out of this,” they said.