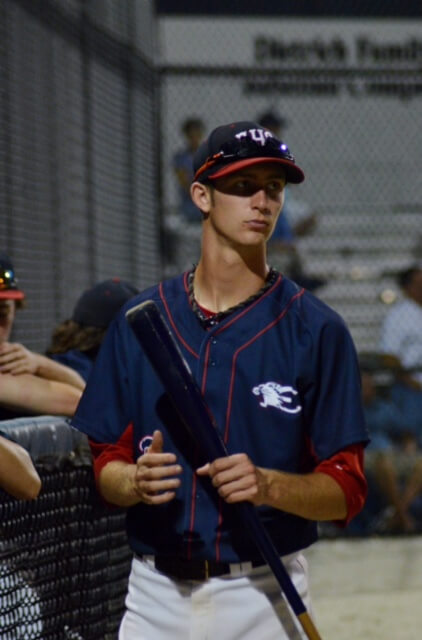 Standing at 6-foot-3-inches and weighing in at 175 pounds, 17-year-old Estero native, high school senior and baseball talent, Nate Gillen, is excited about what the future has in store for him and his baseball career.

Since his sophomore year, Gillen has been committed to becoming an FGCU Eagle.

“Coach Tollett approached me and my Dad in the summer between freshman and sophomore year,” Gillen said. “We sat on it for a few months and then decided to hear him out.”

Gillen is a pitcher at Estero High School. He is currently in the last off-season before his final high school season as an Estero Wildcat.

If things go as planned, Gillen will start his first semester of college at FGCU next fall, but because of his level of play, the major leagues are also an option.

“The fact that they’ve shown interest is a telltale sign that you’ll be involved in the draft,” Gillen said. “It’s pretty exciting, but I’m just going with the flow. It’s a big decision to make.”

“We never wanted to be those parents who forced him to try something,” Lesley said. “But we love baseball, so when he said he wanted to try playing, we were excited.”

During his first few years of Little League, he tried playing different positions, but it became clear just a few years in that Gillen had a special talent for pitching.

White has been on the Estero coaching staff since 2001 and he graduated from Estero High School in 1991 – the first graduating class that went through all four years at the school.

“I’ve seen ‘em all, and Nate is your textbook left-handed pitcher,” White said. “I don’t mind saying that because I was too. At Estero, we’ve traditionally been strong in pitching. Nate is no exception. There’s a strong possibility he gets drafted, but he’s got his heart set on FGCU.”

Last year, Estero Wildcat and Gillen’s former teammate, Josh Winckowski, a right-handed pitcher, passed on a scholarship to FSW when he was drafted by the Toronto Blue Jays in the 15th round.

While Winckowski got a $125,000 contract, that’s not always the case. Both money and the experience are important factors to Gillen.

“There’s tons of pros and cons to both,” Gillen said. “Signing a pro contract, you’re out in the world by yourself, living on your own. That signing bonus is really vital because when you start out in the minor leagues, you’re only making $1,100 or $1,200 a month and you’re only working five or six months of the year, so you have to think about a part-time job, too.”

With the possibility of being drafted in June, but already being committed to FGCU, the choice between the two is something that Gillen has had to take into serious consideration.

But with the draft still eight months away, Gillen’s focus right now is on resting his arm and enjoying his last year of high school.

From the end of October until the beginning of January, Gillen doesn’t touch a baseball. He works with a personal trainer three times a week, has a school schedule where classes are only every other day, and spends his free time hanging out with friends and fishing.

“I’ve taken it easy this past year,” Gillen said. “High school has flown by – it feels like just yesterday I was a freshman. A lot of my time is consumed with stuff involving baseball.”

Gillen’s mom can’t help but be excited at the prospect of still having her son close to home.

“Selfishly, it’s really nice,” Lesley said. “I’m glad we’ll be able to go to his games and I’m glad he’ll be somewhere he wants to be. Since he first stepped onto campus, he’s had absolutely nothing on his mind but FGCU. He loves it. And we toured other schools, mainly UF, but he loves FGCU.”

Gillen’s parents wanted to make sure he checked out other options and bigger schools, and Gillen was happy to, but he feels at home at FGCU.

“Whatever gives you the most practical benefits and what you feel most comfortable with,” Gillen said. “Those are really important. And where you feel you’re going to have better opportunities. That was a deciding factor between FGCU and a larger division I school, too.”

With an exciting future ahead of him no matter what path he decides to take, Gillen knows these last high school months are going to be meaningful and that he’s ready to keep learning.

“It’s exciting,” Gillen said. “Knowing FGCU has a good team already makes me want to work harder to be a starter. It’s a blessing in and of itself to go play college baseball.”

And, as for the Wildcats, they’re excited for Gillen as well.

“Any time you lose a pitcher of Nate’s caliber, you take a hit,” White said. “But Nate is an elite athlete. He’s matured tremendously since his tenth grade year and his time has come.”