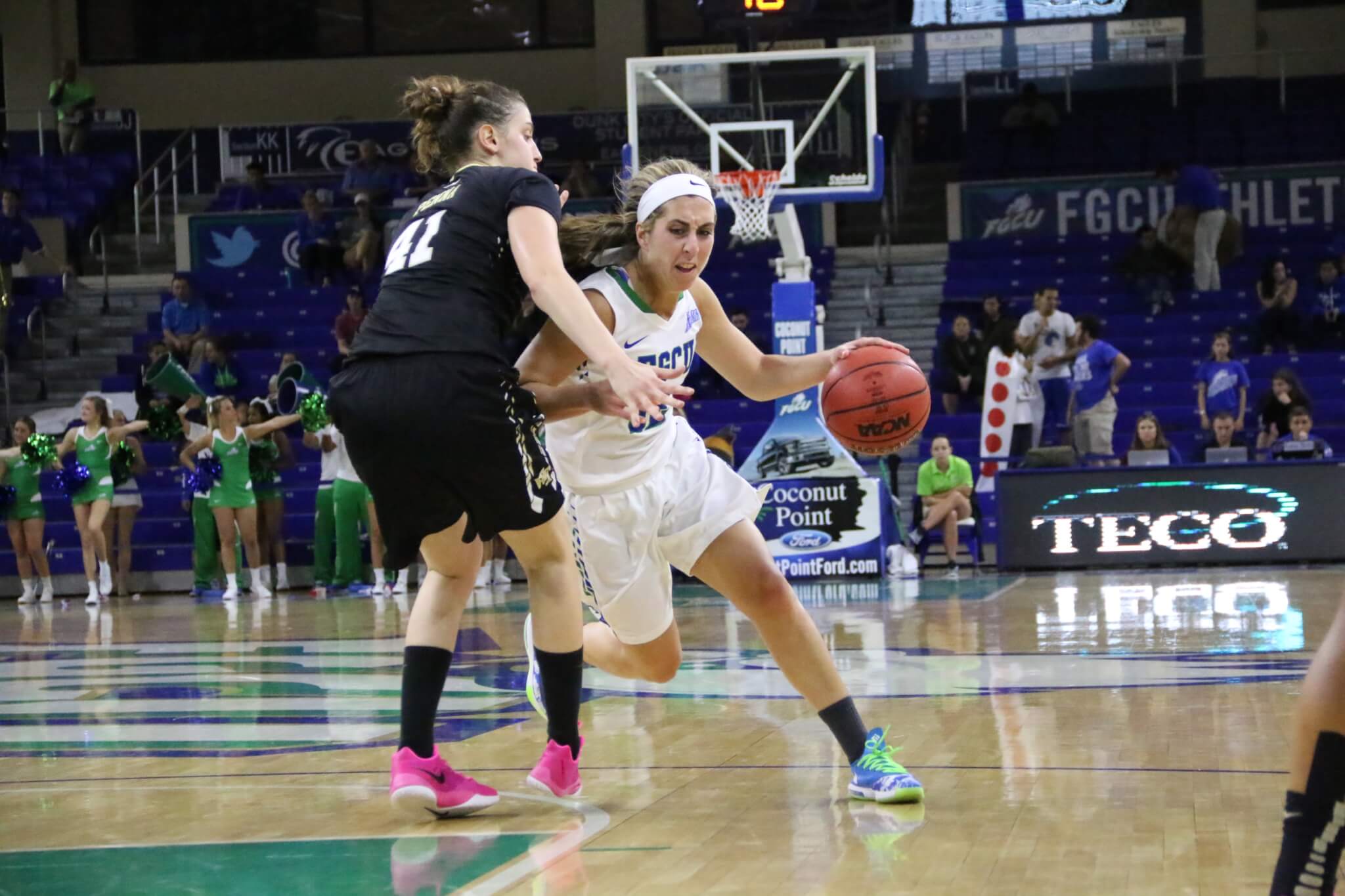 After a convincing 78-51 victory over Bethune-Cookman in the first round of the WNIT, the FGCU women’s basketball team defeated the Wake Forest Deacons 67-48 to advance to the third round of the WNIT.

“I thought we came out and executed offensively,” said FGCU head coach Karl Smesko, a seven-time Atlantic Sun Coach of the Year. “We had a lot of movement. We created a lot of space, and our players made good decisions with the ball.”

After missing the second half of the first-round matchup against Bethune-Cookman due to a minor knee injury, Kaneisha Atwater came back strong for the Eagles, scoring 23 points on 8-19 shooting as well as grabbing eight rebounds.

Kaneisha Atwater reaches up to lob the ball into the net during Monday night’s WNIT game against Wake Forest at Alico Arena. (EN Photo / Kelli Krebs)

“It was just a mild sprained knee,” Atwater said. “I was a little nervous coming down and shooting my layups, but I thought to myself, ‘I may hurt myself a little more if I’m nervous.’ Once I started getting up and down, my adrenaline was running, and I couldn’t even feel it.”

After scoring nine points in the first round of the WNIT, Stephanie Haas exploded off the bench for FGCU, scoring 18 points on 8-13 shooting and knocking down two shots from long range.

In the first quarter, the Demon Deacons won the tip and quickly scored to grab their only lead of the night. The Eagles struggled offensively for the first four minutes of the half until Atwater decided to take matters into her own hands. Atwater would explode for nine consecutive points to give the Eagles a 9-2 lead with4:43 left to play. After a buzzer-beating lay-up by Haas, FGCU would lead 20-7 at the end of one behind Atwater’s 11 first quarter points.

After shooting 3-15 in the first half, Wake Forest’s offensive struggles continued, finally breaking double digits with 2:32 remaining in the second. The Demon Deacons’ struggles didn’t stop on the offensive end of the floor, giving up 18 points in the paint to the Eagles. At the end of the first half, Wake Forest found itself down 31-15, shooting just 22.7 percent from the field on 5-22 shooting.

“In the first half, the defense was exceptional,” Smesko said. “In the second half, I didn’t think we had quite the same intensity on the defensive end when it came to blocking out and limiting shots inside.”

After a dismal first half, the Demon Deacons came out more motivated in the second half, finding more opportunities on offense and getting the ball to finally fall. Wake Forest improved its percentage from 22 to 40, scoring 17 points in the third. Despite a much better quarter offensively, Wake Forest’s defense failed to contain the Eagles, as they woke up from behind the three-point line, scoring three shots from long range and improving from just two in the first half combined. At the end of three, FGCU would lead the Demon Deacons 47-32.

Wake Forest’s newfound offense continued in the final quarter, cutting the lead to just 13. The Eagles would quickly respond to the Deacons’ pressure, with back-to-back threes knocked down by Taylor Gradinjan and Haas to give FGCU its biggest lead of the night, 55-36. The rest of the fourth would be all Haas, as she scored 10 of her 18 points in the fourth, knocking down two threes in the quarter.

“We were spreading the floor, and we had good ball movement,” Haas said. “When I saw the space to attack, I attacked, and when they were off me, I just shot it.”

After scoring 21 points against Bethune-Cookman, Knight would struggle to find her game, battling foul trouble most of the game and fouling out with 3:54 left to play. She would finish the night with six points and five rebounds.

“We have had some players step up when we need it,” Smesko said. “Whit (Whitney Knight) amongst others had huge performances that got us to the second round. Today, Steph (Stephanie Haas) came in off the bench and gave us a huge lift, especially when Whit (Whitney Knight) was in foul trouble.”

Despite a couple runs by Wake Forest in the second half and some cold streaks on offense, the Eagles improved shooting from 36.1 in the first half to 46.2 percent in the second, which helped them beat Wake Forest 67-48 and send it packing, as they advance to the third round of the WNIT for the first time in program history.

FGCU will host Tulane for the third round of the WNIT at 7 p.m. Wednesday at Alico Arena, as it looks to continue advancing further in the tournament.

“This is a really good win for us,” Smesko said. “They’ve beaten Duke and North Carolina and NC State, and we know they are a very capable team.”