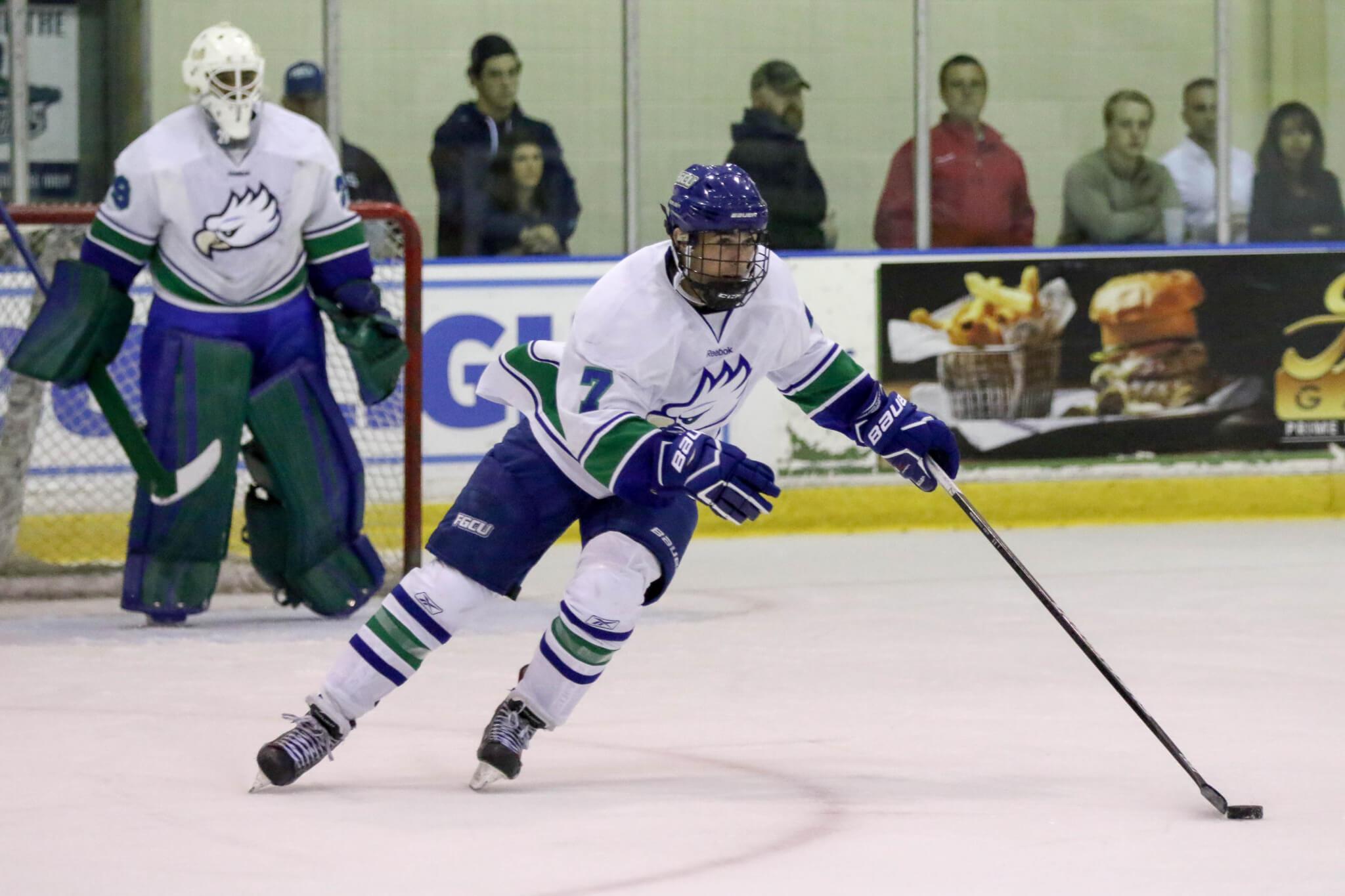 The FGCU DII men’s hockey team defeated the Miami RedHawks 2-1 in the most defensive game for the Eagles thus far Friday night.

Through the first six games, the Eagles were averaging over nine goals a game and hadn’t scored under seven in any game thus far.

One thing that did hold true for the Eagles was their dominant physical defense that didn’t buckle under the pressure in the final minutes against a ruthless Miami forecheck.

RedHawks goaltender Jake Gerdes collected his first loss of the season in a tough one against the Eagles while Tyler Tracy was stellar in this one, picking up his third win on the season.

The tempo was high as two teams entered without a loss in regulation, knowing that, for one, that was soon to end.

The RedHawks got the first big scoring chance, as a RedHawk forward found himself what he thought was all alone in front up until Drake Stimpson poked it off his stick before he could cleanly get off a shot.

The rest of the period was physical, as both teams were hitting hard and playing tough along the boards.

The game started getting chippy with 5:47 left when Brett Yochum and Mark Azarian got into a scuffle behind the net. In the last 20 seconds, Nathan Pelligra laid the body against the boards, sending the Eagles into the intermission fired up.

There were plenty of chances through the first, and the physical presence was felt by the Eagles. Eagles forward Mark Arnone absolutely leveled a RedHawk defender, trying to line him up upon entering the Miami zone and sending him flying across the ice to ignite the fans with a large cheer.

This energy gave the Eagles the chance to finally break the tie with 6:28 left in the period when Jordan Klotz, on a solo effort, took it into the Miami zone with speed, dragging the puck by the first defender and then going between the legs of another before sniping Gerdes’ glove side.

Before the end of the second, the Eagles registered another huge hit when No. 11 Keaton Arkeilpane put the body on RedHawks’ No. 11 Jack Dolby. This was followed by a round of “Our 11 is better than your 11” by the Eagles’ fans.

The third period was a close one. Both teams exchanged chances early, but the Eagles were able to net their second of the night at 14:02 when Pelligra fired a shot that careened off a RedHawks stick and founds its way into the back of the net.

The third was the highlight of Tracy’s night, coming up with four huge saves before the RedHawks were able to cut the lead in half at 2:04 when a shot off the faceoff got by a screened Tracy.

The RedHawks pulled their goalie with 40 seconds left, but the Eagles held strong. With 20 seconds left, Steven Cariglio made an amazing defensive play, taking out a RedHawk forward with a bone-crushing hit that sent him flying across the ice into the boards under the Eagles’ bench.

Saturday night, the Eagles, once again, faced off against the RedHawks, winning 5-3 in a physical back-and-forth battle.

Gerdes got the start again for the RedHawks, picking up the loss with 30 saves on 34 shots. Bradley Rambhajan picked up his fifth win of the season, saving 32 of 35 shots.

The first period wasn’t one with very much even strength play. Five penalties were taken amongst the two teams.

The RedHawks got on the board first off of a power play, making it a 1-0 game with 13:59 left in the period. This was the first time the Eagles trailed on the year, but they wouldn’t trail for long.

At 9:11, Arnone got the Eagles on the board with his shorthanded tally on a breakaway, going backhand forehand then wristing it past Gerdes.

The Eagles went on to kill off a crucial penalty before the end of the first with big saves from Rambhajan.

The Eagles entered the second on leftover time on a penalty from the first period but were able to make a stand.

Arnone got on the board again when he got a breakaway after a big toe save by Rambahajan, and this time, Arnone reversed his first move and went forehand backhand and placed it top shelf, giving the Eagles a one-goal advantage.

The RedHawks answered two minutes later on an odd angle shot that snuck by Rambhajan.

The Eagles’ David Wong and Eduardo Leon netted two more before taking them into the intermission with a 4-2 lead.

The third period of play was a tight one, as the RedHawks tried desperately to even the score with the Eagles.

Rambahajan and the Eagles defense held strong until the RedHawks’ third power play of the period when they were able to score, making it a one-goal game. The Eagles picked up another penalty at 2:24 when Michael Chemello got his stick tangled up with a RedHawks forward.

The RedHawks pulled Gerdes from the crease with 1:09 remaining, making it a 6-on-4 tilt. But, Pelligra and Koerner battled in the RedHawks zone, and Koerner took the puck in the corner and shot it past a RedHawk trying to block the shot in Gerdes’ dojo. When the clock expired, the Eagles took a 5-3 victory.

The Eagles are back in action next weekend, as they take on Davenport University on the road in Grand Rapids, Michigan, in a back-to-back-to-back series on Friday, Saturday and Sunday.