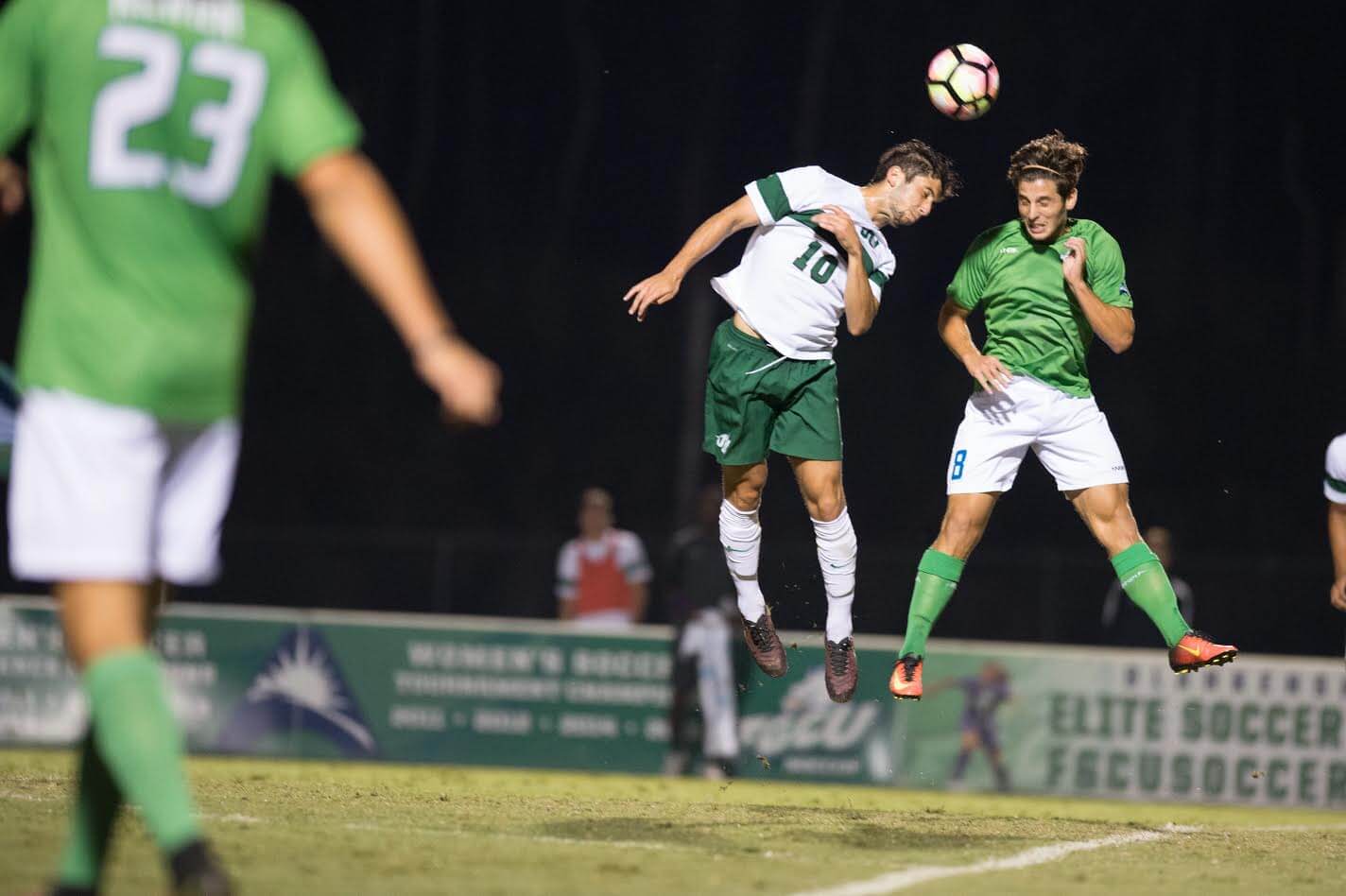 In a dramatic overtime victory, the FGCU men’s soccer team defeated Jacksonville 3-2 to claim its fourth ASUN Championship and a spot in the big dance.

“The proudest thing I have about this team is that they won the conference when it was that good,” FGCU head coach Bob Butehorn said. “JU is a reflection that they were tough; they battled, and it was just fun. So, I’m proud of these guys to go and win it.”

In a back and forth scoring affair, Eli Roubos’ goals in the 39th minute and the 81st minute propelled the Eagles past Patrick Harding and the Dolphins to earn their first NCAA tournament berth since 2014.

“I’m not a goal scorer; I’ve never been a goal scorer,” Roubos said. “I felt I wanted the ball more than the Jacksonville defenders for both of my goals, and Kamar (Marriot) did tremendous to get on the end of both my goals.And, he helped a lot, and the whole team helped a lot.”

Facing a fifth seed that knocked down first seed UNF to book a spot in the ASUN Men’s Soccer Championship, the Eagles maintained the bulk of possession in the first 10 minutes of the match.

Albert Ruiz continued to lead the Eagles’ frontline, scoring his 20th goal of the season by striking a thunderous volley in the back of the net after Harding’s initial save from Arion Sobers-Assue’s header to give the Eagles a 1-0 lead.

With the opening goal of the match, Ruiz became the first ASUN player since 2005 to score 20 goals in a season, also becoming the 15th ASUN player to do so.

Ten minutes after Diego Sanchez brought the game level for the Dolphins, Roubos headed home his second goal of the season from Marriot’s headed pass to put the Eagles back up one,  2-1,heading into the half.

The Eagles came out the same way they did in the beginning of the match, holding possession and playing patiently and offensively, as they looked to take their 2-1 lead into the final.

Roubos, once again, proved to be the hero after JU equalized in the final 11 minutes of regulation, this time thanks to Eji Mrabure’s first goal of the season, sliding the ball past Harding this time with his foot, scoring his third goal of the season and the goal to send FGCU dancing.

Despite falling to the Eagles in the final, Harding set an ASUN Men’s Soccer Championship record for saves in a tournament, recording 20 saves in three contests.

After the game, Roubos, Miguel Jaime, Marriott and tournament MVP Ruiz were named to the All-Tournament team.

FGCU will find out its first opponent in the NCAA tournament at 1 p.m. Monday during the NCAA Selection Show. FGCU Athletics will host a viewing party open to the public in the Hospitality Suite at Alico Arena on Monday at 12:30 p.m.

“I want to be a part of something special,” Ruiz said. “I want to win my first NCAA game with this school, and I’m just looking forward to the NCAA game.”