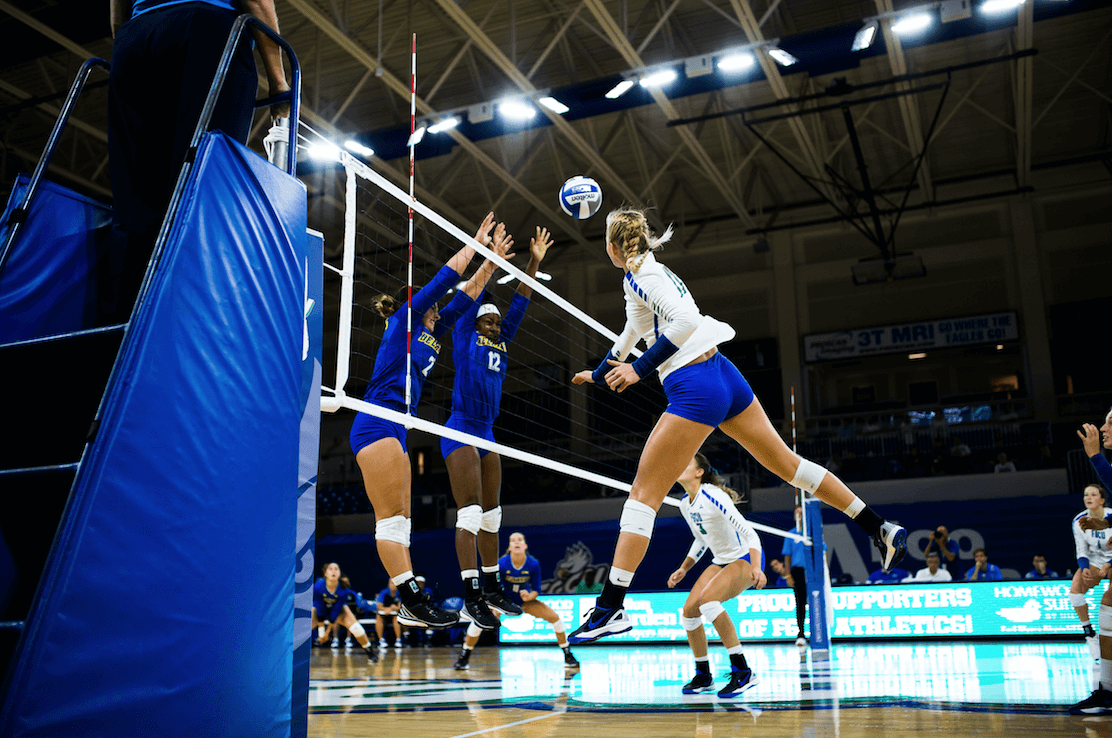 Coming home after the Ohio tournament and starting the season off 1-2, FGCU’s women’s volleyball team came out on top against Delaware, defeating them in three sets for their home opener Friday night.

“It was a great start for our first home opener.” Head coach Matt Botsford stated in a press release. “They executed at a very high level for a pretty good crowd.”

FGCU showed up both offensively and defensively this match and that showed prominently throughout the sets, especially considering FGCU totaled 49 kills and 49 digs while Delaware totaled 16 kills and 36 digs.

To start off the first set, Ciara DeBell racked up her first kill of the match to give FGCU a competitive edge. FGCU pulled ahead 6-2 which was followed by a kill from Amanda Carroll who brought the team up to 7-2, forcing the Blue Hens to take a time out. Marlene Moeller’s and Carroll’s defensive block widened the gap to 19-10 and, following Delaware’s last time out, FGCU scored five consecutive points for a 13 point lead to end the first set.

The Eagles took the first set 25-12. Moeller and Carroll combined for eight kills and setter, Maggie Rick, paved the way with 13 assists.

“We worked a lot on blocking defense and hitting high above the blocks.” Carroll stated in a press release. “Our practices leading up to our first home game really helped us out.”

Delaware became more competitive in the second set as the Eagles and the Blue Hens battled for the lead throughout the first half. FGCU worked to get a two-point lead, 10-8, but the match up continued when they became tied 12-12. Serving was a big factor in the game, and DeBell got a service ace for the team, pulling them ahead 18-12 and increasing the score gap between the two teams.

Following the rallies in the second set, FGCU put up a big block to push the opposing team closer to game point, 23-16. A last ditch effort from the Blue Hens edged them closer to FGCU’s score, but DeBell added another kill from the outside to close out the second match with a win, 25-19.

At this point in the match, FGCU had a 2-0 advantage coming into the third set. In the start of the third set, Delaware held the lead 6-1 due to FGCU’s consecutive serve receive errors. FGCU took a time out to recover.

“We were like, ‘we need to pick it up because we know how we play and we know how we work as a system.” Carroll stated about the third set. “When we were back in the same right mindset, we picked it up.”

Head Coach Botsfold also stated, “Of course we don’t want to be down 6-1, but I like the way we recovered.”

A kill from Daniele Serrano tied the set nine all, and brought the serve back to FGCU. The Blue Hens were forced to take a time out as FGCU completed a comeback, taking the lead 16-12 in the final set. Delaware got the ball back and added another point to their score, but FGCU stayed relentless and took the set in 25-13 with a match-winning kill from Carroll, totaling 13 kills for the match. The Eagles were victorious, winning three consecutive sets against the Blue Hens.

“The last couple of weeks, we’ve talked about game management and playing smart,” head coach Botsfold said. “Being physical doesn’t always equate to wins, you’ve got to play intelligent volleyball and see what the other team is doing.”