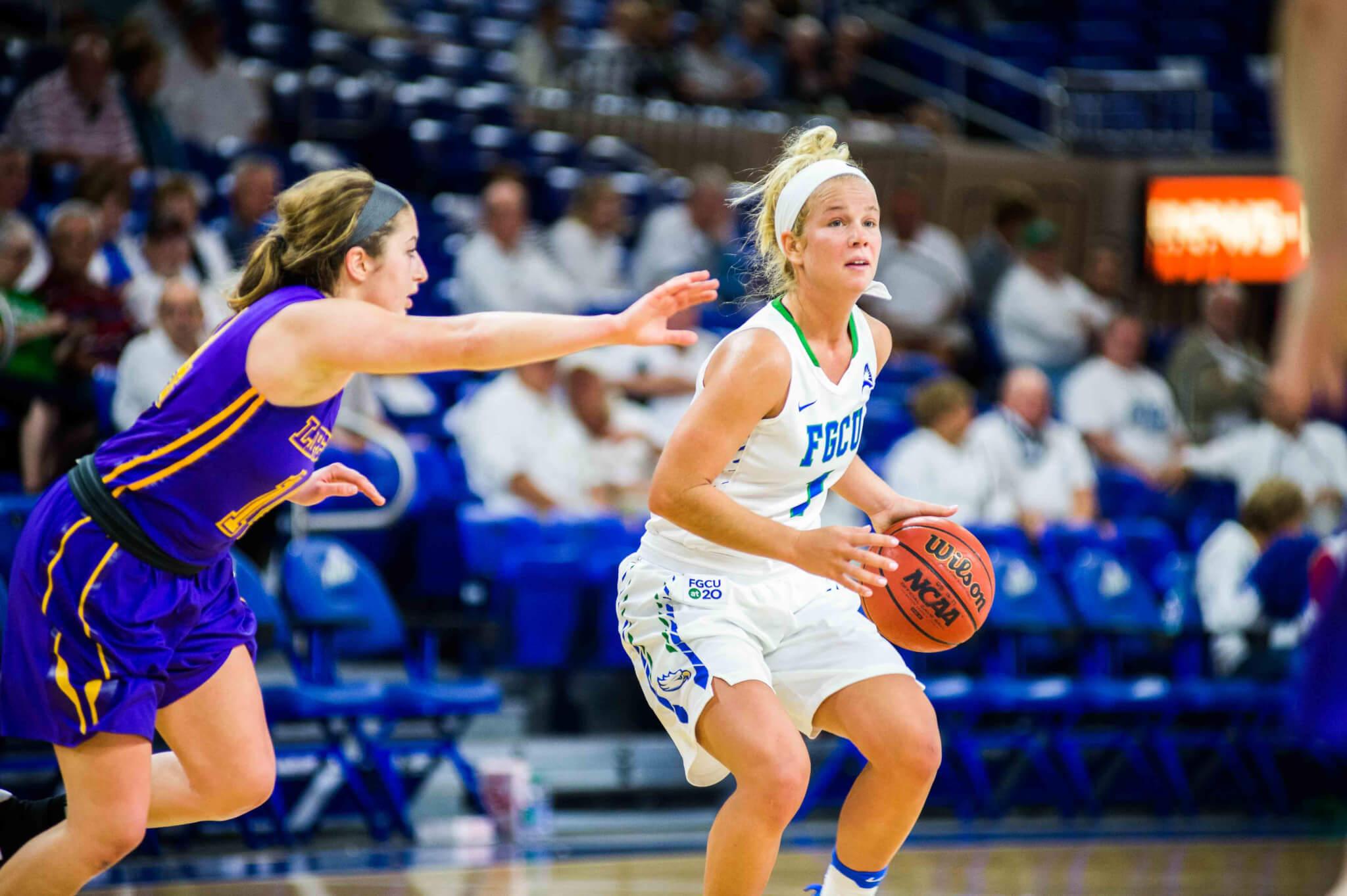 Coming off its 69-35 victory against Kennesaw State, the FGCU women’s basketball team closed out its two-game home stand with a 98-50 rout of Lipscomb.

Knocking down 20 shots from behind the arc to propel them to their 15th victory at Alico Arena, the Eagles remained tied with Stetson atop the ASUN with a record of 10-1.

Falling just two threes short of the program record for threes made in a single game (22), the Eagles had five players finish in double figures, led by a combined 42 points from Haley Laughter and Jessica Cattani.

“I thought it was a really good game for us in terms of getting the ball to shooters and knocking down shots,” FGCU head coach Karl Smesko said. “Obviously, they played zone for 95 percent of the game, and we were able to move the ball on them and get it to open people. A lot of people were knocking down shots. Haley (Laughter) and Jessica (Cattani), in particular, did a great job from behind the arc. I thought we played good defense for most of the game, and it was a good win.”

Firing four shots from long range in the first quarter of play, all of Laughter’s 21 points came from behind the arc, as she finished one three away from the program record for threes in a game and two threes away from the ASUN all-time record.

Playing just 21 minutes off the bench in the Eagles’ 76th consecutive ASUN home regular-season win, Cattani went 4-5 from long range and 7-7 from the charity stripe en route to her first 20-plus point performance of the season.

Adding to FGCU’s three-point barrage, Taylor Gradinjan and Nasrin Ulel each knocked down four shots from long range, scoring 12 points and 13 points each.

Notching her second consecutive double-double following her 11-point and 14-rebound performance against Kennesaw State, Tytiona Adderly scored 12 points and snatched 13 rebounds to round out the Eagles’ double-figure scorers.

Matching their strong play on the offensive end with strong play on defense, FGCU forced the Bisons to throw the ball away 20 times, scoring 27 points off turnovers.

The Bisons came out of the gate showing a 2-3 zone to the Eagles’ offense, and they capitalized on Lipscomb’s game plan, scorching the Bisons with six shots from long range in the first quarter. Fueled by Laughter’s 12 points in the first quarter, FGCU led 24-8 at the end of one.

Following Laughter’s strong performance in the first, it was the Adderly show in the second, as she came within just two points of her double-double, snatching 11 rebounds and scoring eight points and propelling the Eagles to a 51-19 lead at the half.

After just knocking down three shots from behind the arc in the second quarter, the three ball came alive again in the third. Laughter hit three of the Eagles’ five threes in the third, as they took a commanding 74-35 lead.

As the Eagles entered the final quarter with 15 makes from downtown, Nasrin Ulel’s spark off the bench in the third transitioned into the fourth, as she knocked down three of her four triples in the final quarter of action.

Reaching 20 makes from long range before the final buzzer, FGCU moved to 21-7 on the season in its second to last home game of the regular season.

The Eagles will now hit the road to face USC Upstate on Saturday, Feb. 18 and NJIT on Monday, Feb. 20 before returning home to face Stetson in what could be the game that determines the ASUN regular-season championship on Saturday, Feb. 25.