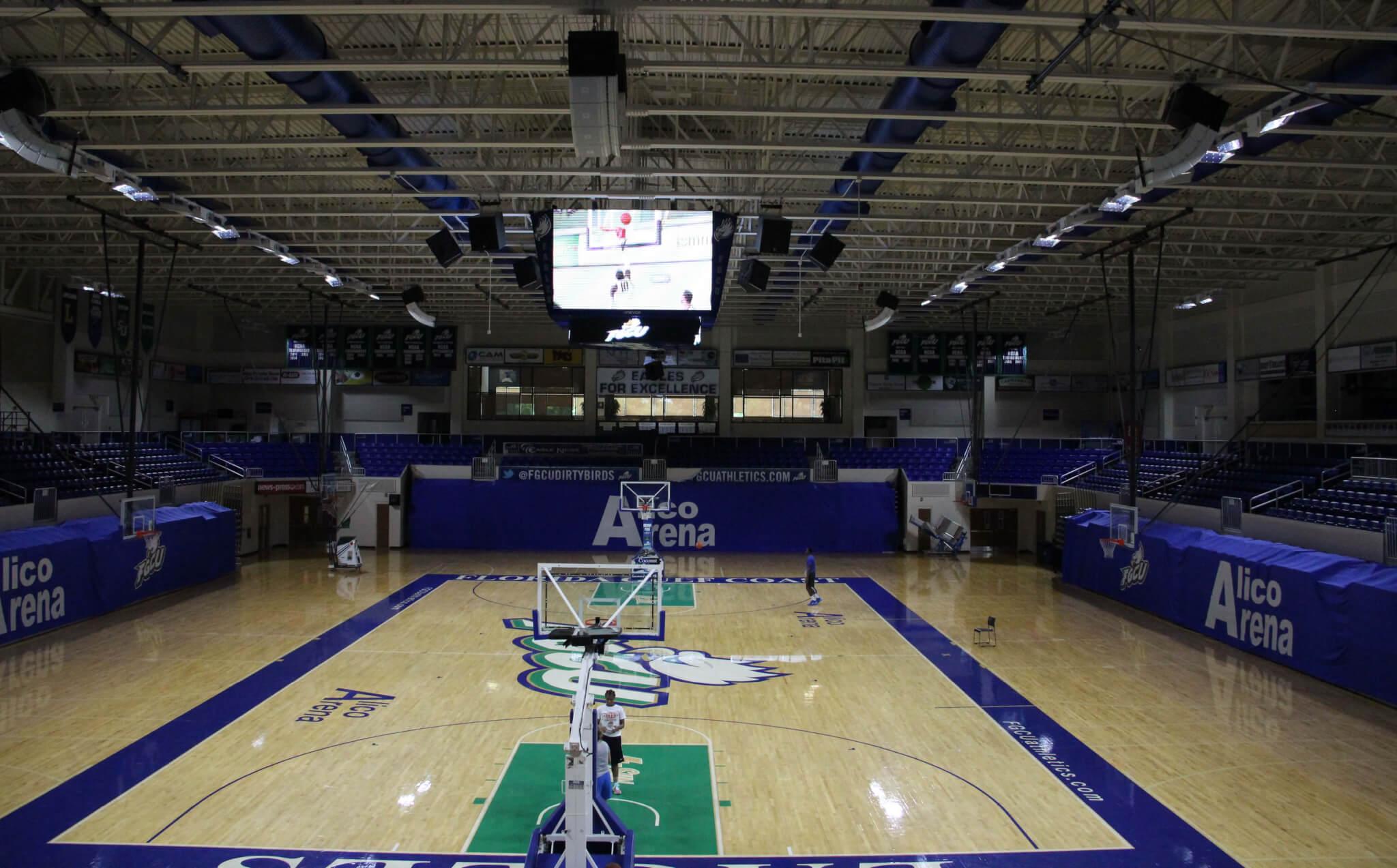 The new LED scoreboard plays a demo video after being installed

When herds of students file into Alico Arena on Aug. 19 for the annual Eagle Revolution Week of Welcome pep rally, they will be greeted by Dunk City’s new centerpiece: a new, four-sided, 12-by-8 LED scoreboard.

“It’s become such a visual society, fans expect to see it,” said FGCU Athletic Director Ken Kavanagh of the new technology added to the 13-year-old arena.

has outgrown since its days as a new Division II program

just a few years ago.

The addition follows an LED scorers’ table, which was unveiled last season and displayed graphics with the teams logo, along with the occasional advertisement.

“The old scorers table was an embarrassment,” Kavanagh said. “It wasn’t something you’d expect to see at a D-I program

Along with the highly anticipated scoreboard, which is sure to heighten the crowds energy and continue

to produce the programs

notable game-day atmosphere, Alico will also benefit from several other renovations this summer. Two secondary scoreboards for opposite ends of the main arena, two scoreboards for the auxiliary gym, nine time clocks

and a new sound system are also on the list

“To not have that is kind of a throwback in a way,” Kavanagh said of the long list of technological renovations.”We don’t want to get too old-fashioned. Fenway Park is cool with their slide-in scoreboard, but Fenway also has a Jumbotron.”

The new board will allow fans to see other live game stats that weren’t previously displayed, such as players’ total points and fouls, and of course, replays. Tentative plans include time-out interactive crowd games and graphics and advertising. Kavanagh even hinted at the possibility of a kiss cam.

“I think this adds an element to (Alico Arena) that not only will be appreciated on game night, but is also a marketing tool for us as far as promoting our program

and a revenue tool for advertising,” Kavanagh said.

has been working on the project since June 2014.

“The process has been unique and extremely rewarding,” Blood said. “The most rewarding part of the project will be its impact to Florida Gulf Coast University. I’m extremely proud of the fact we included LED scoreboards in the auxiliary gymnasium for our general student body to utilize during intramural and sport club programming

. I’m also proud of the fact we instituted cost saving measures for the University in sharing equipment during a Wi-Fi project in Alico Arena to help enhance our internet connectivity during high traffic times.”

graduations that used the arena as a venue.

“I am looking forward to the Commencement ceremonies and other student functions where the video board and new sound system help enhance their experience,” Blood added, “and of course the impact on our student-athletes, coaches and fans during game days… the Alico Arena game day atmosphere will never be the same.”

Kavanagh says the impact of the video board will extend past athletics.

The new LED scoreboard plays a demo video after being installed

“This not only helps our basketball and volleyball programs

, but the university as a whole,” Kavanagh said, “adding the frequent use of the venue for other events, including graduation ceremonies, fairs and camps.”

To follow, a new video scoreboard and renovated press box and suite for the softball complex will arrive before the spring season.

“We’re hoping within another year that well be able to get the same for Swanson Stadium,” Kavanagh said.

Like most additions to the university, the expedited growth and support can be attributed to the mens’ basketball teams NCAA tournament appearance and trip to the Sweet Sixteen in 2013.

“Before we went to the Sweet Sixteen, I’m not sure if the campus tours even stopped at Alico Arena,” Kavanagh said. “­After the Sweet Sixteen, they’d stop in, see the ESPY, see the net from the Sweet Sixteen and they would come into the arena. When they came in, they’d look up and say,­ ‘Whoah. High school scoreboard?’ Now you see a video board that allows itself to generate another positive impression on the university guests.”

Alico Arena will get its first taste of game day atmosphere with its new accessories in August during Eagle Revolution, when students return for the fall semester.

Eagle Revolution will be held at Alico Arena at 6:30 p.m. Aug. 19. FGCU students with a valid