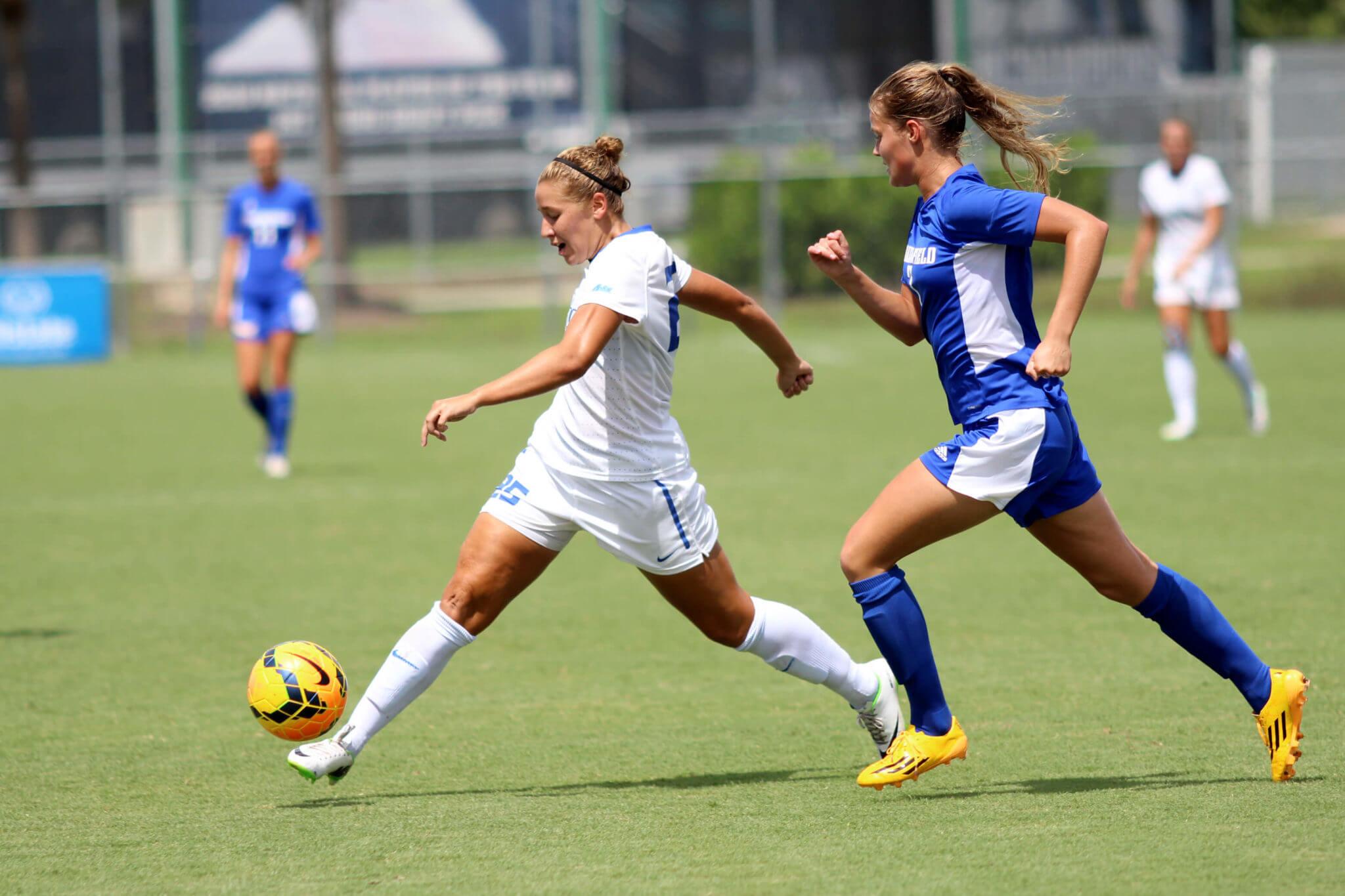 The Florida Gulf Coast University women’s soccer team travels to Jacksonville to face the University of North Florida at 7 p.m. Friday, Sept. 26, then to Philidelphia to play the LaSalle Explorers at 1 p.m. Sunday, Sept. 28, as the squad’s new all-time scoring leader looks to extend her record.

“This is an amazing feeling,” Tindell said after the Eagles’ second shutout of the weekend. “I’m really happy about it, but I’m trying not to focus on it.”

Although she was fully aware of how close she was to breaking the record, it wasn’t Tindell’s ultimate goal for the afternoon.

“I thought to myself that (breaking the record) would be nice, but it wasn’t like ‘All right, I’m going to go get it,’” she said.

“Tabby has been unbelievable,” coach Jim Blankenship said. “Tabby is a very, very motivated kid and a very humble kid. We’re blessed to have her, and I believe she’ll continue to do incredible things because she’s grounded and focuses more on our team doing well.”

Both of Tindell’s record-breaking goals came in the first five minutes of Sunday’s game, giving the Eagles an early 2-0 lead on the Roadrunners. Her first goal came in the third minute after breaking away with an assist from Paulina Speckmaier to ease past Bakersfield’s goalkeeper.

Just after an announcement of her tie with 2010 alum Amber MacCall’s career goals’ record, Tindell immediately sent another ball into the back of CSU’s net to claim her newfound title. The record-breaking goal marks the 25th of her FGCU career and 10th goal this season for the Ocala native.

“(After the first goal) I was getting really excited about it, especially since we scored so early in the game,” Tindell said. “We got really amped, and the second goal was just a lucky spot I was in. Shannen took a great spot, and it just so happened to bounce right in front of me, so it was pretty convenient.”

MacCall, an Estero High grad, held the all-time leading scorer record prior to Sunday’s game with 24 goals in her three seasons with the Eagles.

Later in the first half, Speckmaier pushed FGCU’s lead with another goal for the Eagles in the 25th minute to give the Blue and Green a comfortable 3-0 lead and a chance to allow all of FGCU’s players to see field time.

“These games are always hard,” Tindell said. “It’s easy to get pumped up for teams like Texas A&M and Miami cause those are such big schools and you want to play.

“But it’s the smaller schools that go unnoticed that are the ones to sneak up on you and really hurt you in the season,” Tindell continued. “It was a great game. I’m glad we got to get out of here with a win.”
Wofford falls 3-0

The Eagles defeated the Wofford Terriers Friday night, 3-0. Shannen Wacker was the first on the board, scoring three minutes into the second half. Tindell added two more goals for the Eagles in the 56th and the 72nd minute of the game.

Despite a slow start in the first half, the Eagles were able to overcome their first-half offensive shortcomings and break the tie game with three second-half goals to win the match.

“The first half we played well, we just didn’t get any goals” Blakenship said. “The second half, I thought our attitude was better, especially being aggressive. Overall, we were a step faster.”

Blankenship had high praise for Tindlell for her performance against Wofford.

“She’s been unbelievable.,” Blankenship said. “She’s had so much success. I thought she played well the whole game, and we needed those goals.”

It did not take long for the Eagles to score their first goal after halftime. In the 48th minute, Wacker capitalized on a Tindell pass into the box and put the ball in the back of the net. It was Wacker’s second goal of her senior season and 23rd of her career.

The Eagles’ offense did not let up after the first goal. In the 56th minute, FGCU scored again. Tindell scored a header off of a corner kick, served from Ashley Parks. Tindell scored again in the 72nd minute after receiving a pass from Parks which Tindell chipped high over Campbell and into the net to make the score 3-0. Tindell scored her 7th and 8th goals of the season and now has 23 career goals.