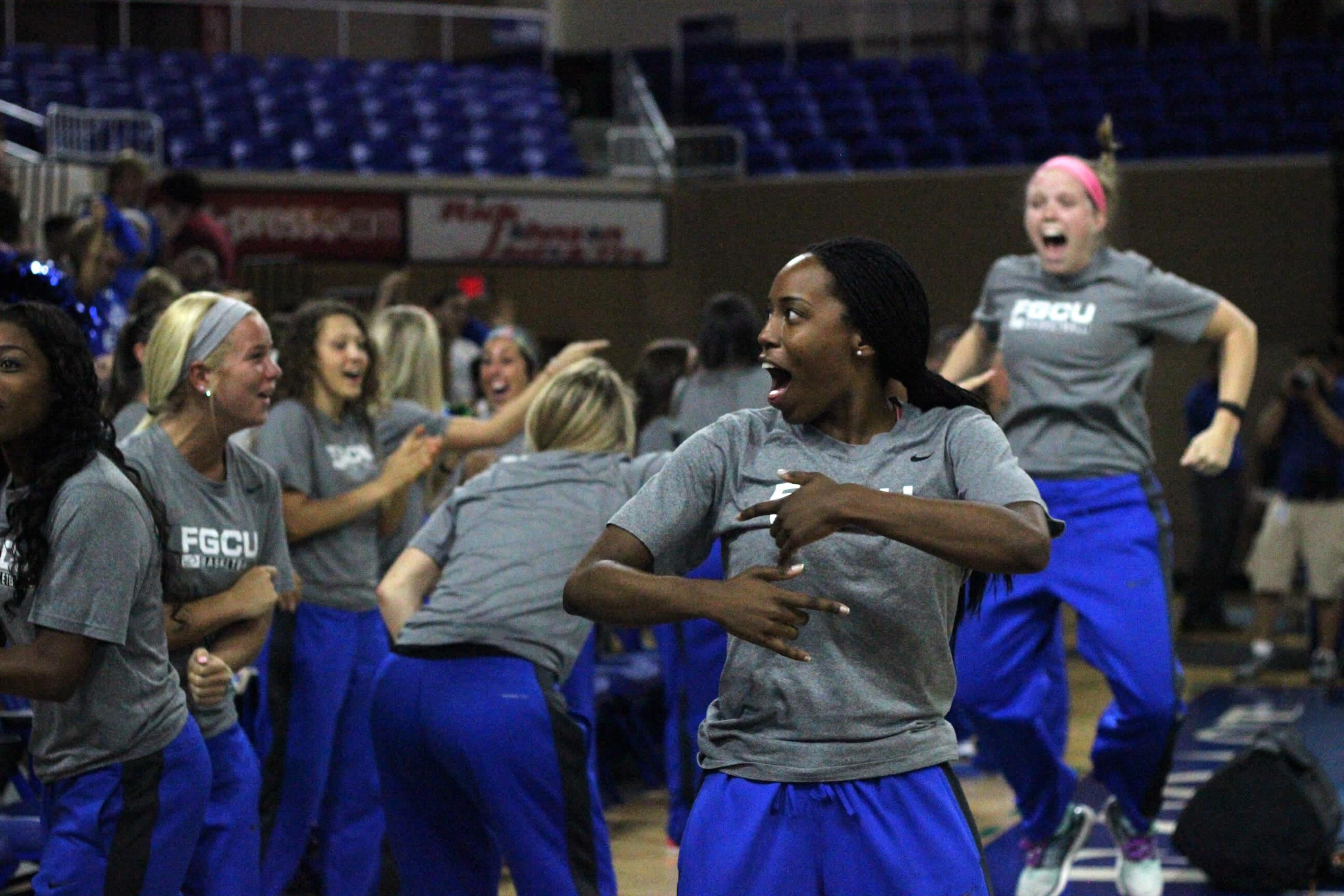 DyTiesha Dunson and the rest of the women's basketball team reacts to hearing they will be playing Oklahoma State again in the opening round of the NCAA Tournament. (EN Photo / Kelli Krebs)

Monday night at Alico Arena, the Florida Gulf Coast University women’s basketball team got the revenge matchup that no one saw coming.

The No. 7-seed FGCU will travel to Tallahassee to play the No. 10-seed Oklahoma State University in the first round of the NCAA Tournament at 11 a.m. on Saturday at the Donald L. Tucker Civic Center. The game will be televised on ESPN2.

“We are just excited being in the NCAA Tournament,” FGCU head coach Karl Smesko said. “The rematch aspect of it makes it interesting. We have a lot of respect for Oklahoma State. They were obviously in the Sweet Sixteen last year, I haven’t seen them play at all this year but we’ll use tonight to start breaking down some film and see what they do and what their tendencies are.”

The Eagles lost a heartbreaker in overtime of last year’s NCAA Tournament opening round game to OSU, 61-60. The loss resonated with most of the players this year and has been a driving factor for the Eagles’ success heading into the NCAA Tournament.

“We are very motivated for this rematch,” FGCU redshirt junior guard Whitney Knight said. “I actually think that it’s pretty crazy that we did get that rematch because that has been stuck in our head. I know it has been in mine this entire season so I think it’s extra motivation.”

This is the Eagles third trip to the NCAA Tournament in four years and this is the lowest seeding FGCU has ever received heading into the tourney.

“We are very excited about the seed,” FGCU senior guard Jenna Cobb said. “People were saying that we may be an eight or nine for a while now and now we hear seven so we are very happy with it and excited to play Oklahoma State again.”

Whitney Knight reaches for the ball during last year’s NCAA first round game against Oklahoma State.

This game will be somewhat of a home game for FGCU considering the proximity compared to last year’s matchup in West Lafayette, Indiana.

“Playing close enough to home that our fans can get there, it’s a drivable game and to have the support of all of the people that supported us this year is probably the biggest thing,” FGCU head coach Karl Smesko said.

“They’re a great team. They are very hard to guard. It is a difficult matchup. Oklahoma State head coach Jim Littell said to the media in Stillwater on Monday. “They are very unconventional the way they play, but very efficient, very effective and a very well-coached team.”

The Cowgirls are led by Brittney Martin, who averages 13.7 points per game and adds 8.7 rebounds per contest. The 6-foot junior impacted last year’s contest by grabbing 15 boards and tallying nine points in the one-point victory.