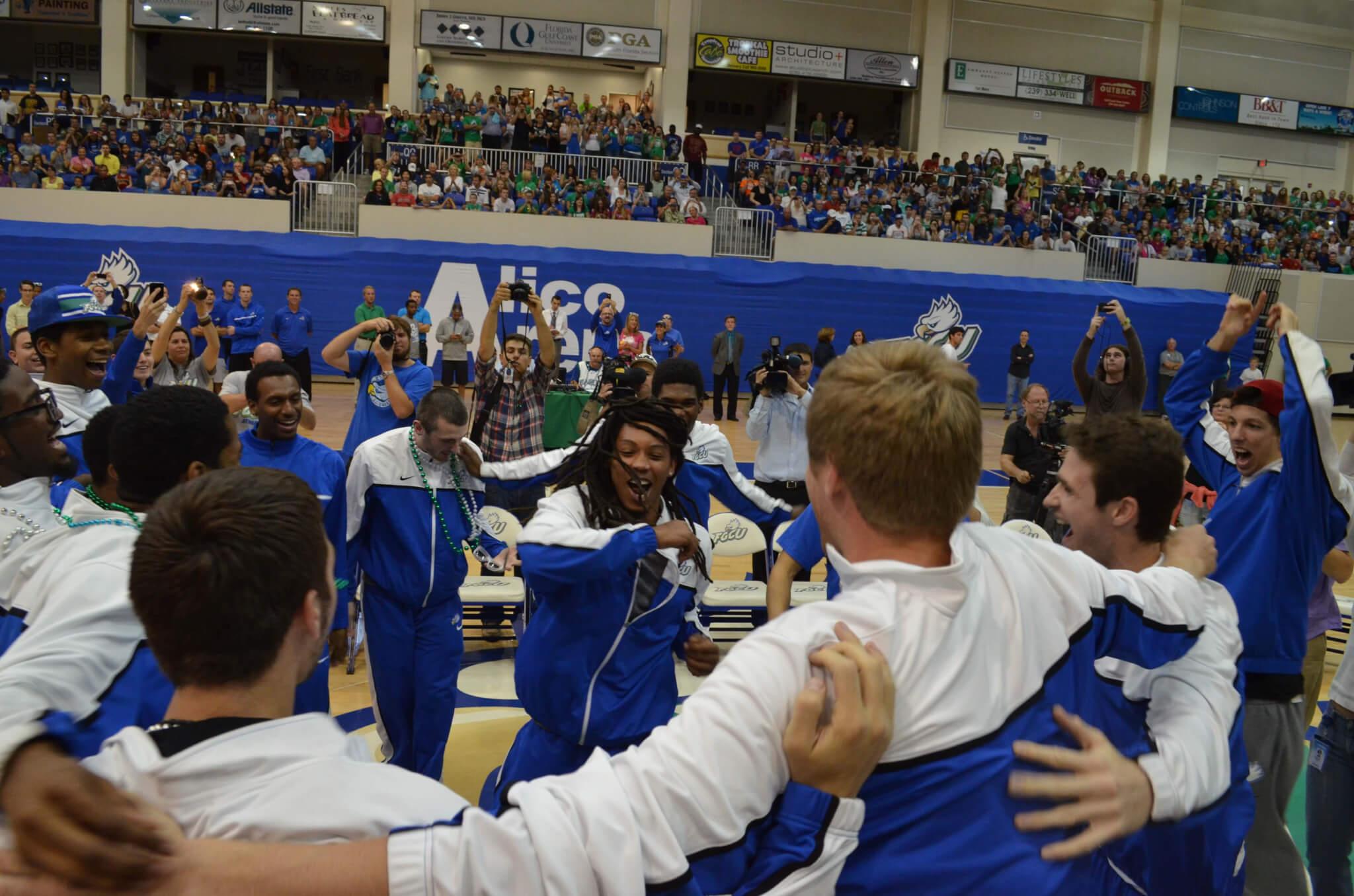 I was trying to think of a rising collegiate program that had a better year than Florida Gulf Coast.

Granted FGCU didn’t win any national championships, but it arguably did more for its athletic program than any other school in the Atlantic Sun, if not the country.

No longer is FGCU an acronym that nobody understands. When people hear and see FGCU they know that it’s Florida Gulf Coast University, located in Fort Myers, Fla. Aka Dunk City.

It’s not Fla. Gulf Coast or Florida GC as some networks liked to call us, yeah I’m talking about you CBS and Turner Sports; it’s FGCU.
That was thanks in large part to the growing success all the athletic teams had this year.

It all started in the fall, with the defending A-Sun men and women’s soccer teams taking the pitch looking to defend their titles and get back into the NCAA tournament. And what do you know, they both did.

They were literally inches away from winning as they fell to host University of South Florida 5-3 in penalty kicks.

The women won three straight entering the A-Sun tourney and dominated the tournament once again. Not allowing a goal throughout, they needed another freshman, this time Ally Kasun, to break the tie and send them into the NCAA tournament.

And once again they faced off against the University of Florida in Gainesville (they fell 3-0 in 2011). This time they were closer but still fell 2-0.
Also during the fall, volleyball won 15-straight games and clinched the A-Sun regular season title.

On Nov. 13, FGCU hit the map hard. They defeated the University of Miami 63-51 in the first home game of the year. That win rightfully got the attention of some national media.

A few wins in March really propelled FGCU basketball in the media, but this was a good start.

Five straight championships, that’s a number that is just incredible. A collegiate dynasty at its finest.

Coach Studd has done a tremendous job turning the swimming and diving program here the most successful program on campus.

Oh, and that same weekend the baseball team swept the then-ranked University of Florida. That series propelled FGCU into the national rankings and the spotlight.

Like Billy Mays used to say, but wait, there’s more.

Next up, the wonderful month of March. The famous name of “March Madness” definitely lived up to the name this year.

FGCU decided it was a good idea to make their first appearance to the dance a memorable one.

Making the Sweet 16 after owning both Georgetown and San Diego State, winning by 10 points in each game, 78-68 and 81-71 respectively.

After that, FGCU became a household name. ESPN was here live. The local media printed multiple stories each day. It even seemed like the national media wrote about FGCU each day. Heck, we at Eagle News even got caught up in the snafu and had three straight issues about the basketball team.

No complaints here though. Heck, even I got national exposure.

The campus is alive now. People are excited to call Dunk City home. Students are bragging more and more about their school than ever before. Campus tours are larger.

The success this year has set the bar very, very high for the upcoming years. No longer will a mediocre season be acceptable here.

This new standard here at FGCU is a testament to how well this program has been doing over the last 12 months.

This new brand of success will be amazing for FGCU. Enrollment will rise, boosters will start pouring in money and FGCU will be an acronym everyone will know.

In case you missed it…

After carding a program-best, total round score of 291 on day two of the 2013 Atlantic Sun Conference Championship on Tuesday morning at the Jekyll Island Golf Club in Jekyll Island, Ga., the FGCU women’s golf team find themselves in second place on the 10-team leaderboard…

Congrats to the FGCU women’s tennis team (11-7, 4-4 A-Sun), which broke its four-match losing streak with a 5-0 defeat of Bethune-Cookman (13-10, 3-1 MEAC) on Sunday afternoon. Elizabeth and Sarah Means starred in the No. 3 doubles won 8-0. To secure the doubles’ point in the dual match, the No. 2 pair of Johanna Sterkel and Morgan Bechtel defeated their opposition 8-4. Gyanna Mandic and Bettina Botha completed the doubles sweep for FGCU in a close match in the No. 1 position as they downed Bethune-Cookman’s top doubles’ duo…

For the second year in a row, the FGCU women’s basketball team lead the nation in three’s per game. The Eagles, who finished the 2012-13 campaign 65th in the final NCAA Women’s Basketball RPI, ranked 1st in the nation in triples per game (9.4).