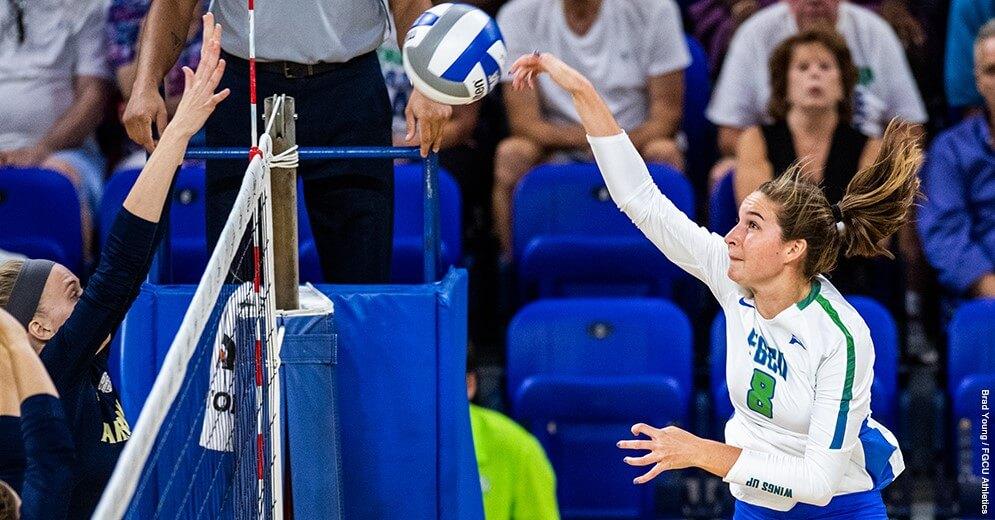 Photo by Brad Young // Snowy Burnam capped off the weekend for the Eagles with a match-high 15 kills against George Washington University.

The FGCU women’s volleyball team has gotten out to a team-best 6-0 record after sweeping the Hurricane Invitational this past weekend.

In the first game of a doubleheader on Friday, FGCU took on the South Florida Bulls.

Courtney VanLiew led the Eagles with a 13 kill performance, the lone player with double-digit kills, in their win against USF. Chelsey Lockey also impressed with a double-double, her second of the season, in the matchup with 37 assists and 13 digs in the team’s first victory of the weekend.

FGCU got their first-ever win against an SEC team after beating Auburn in the second game of the doubleheader on Friday. VanLiew would record another double-digit kill game with 18, and Dana Axner came up big for the Eagles with a game-high 17 digs as they defeated Auburn 3-0.

“Our team played extremely well today, particularly from the service line,” FGCU head coach Matt Botsford said. “We were able to put the opponents in some tough positions after first contact and that allowed our block and defense to work.”

FGCU would then go on to beat George Washington in three straight sets for the final game of the Hurricane Invitational. Snowy Burnam led the Eagles with a match-high 15 kills, also contributing five digs, three assists and two blocks.

“Snowy was outstanding today in every facet of the game, and I loved how tuned in she was to what was happening out on the court,” FGCU head coach Matt Botsford said. “Her attacking on the backside started to open things up for everyone else and her passing was a big difference-maker.”

The Eagles will now head to Lexington, Kentucky to take part in the Bluegrass Battle Tournament starting Sept. 13th when they face Indiana University.