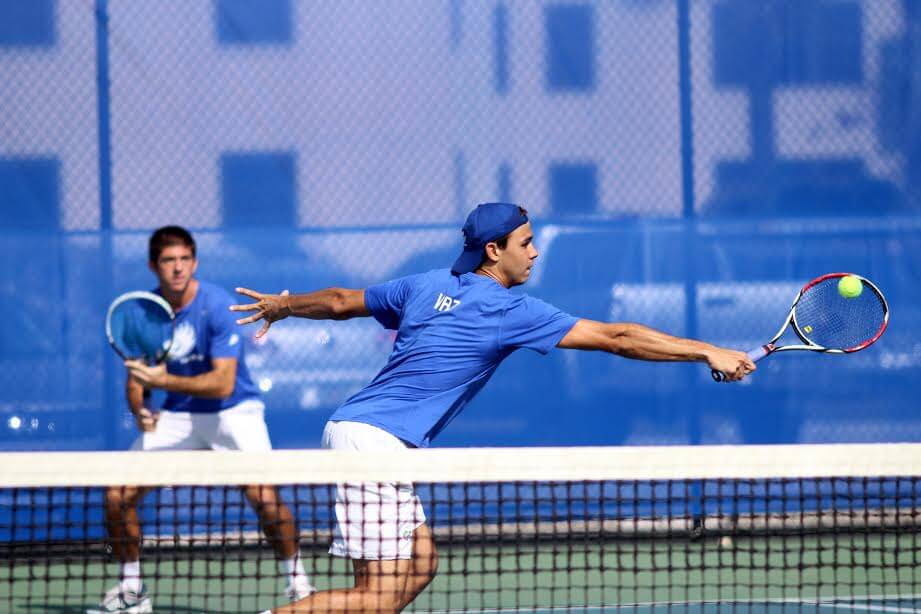 The Florida Gulf Coast men’s tennis team heads to Daytona Beach to play Troy University and Bethune-Cookman University on Feb. 13 and 14. The team is coming off of a successful weekend of two wins and a record-breaking performance by senior Jordi Vives.
“Our first approach is to focus on being ourselves and paying little attention to who our opponent is,” head coach CJ Weber said. “We focus on who we are and what we bring to the table.”
On Friday, the team defeated Liberty University (4-4) 6-1. The Eagles started the match by securing the doubles point. Seniors Vives and Tianyu Bao won their match 6-3. Sophomore Andres Alfonzo and freshman Austin Bates clinched the doubles point with a 6-0 win over their Liberty competitors.
The Eagles continued the dominating fashion in singles play. Bates kicked off the singles matches with a 6-2, 6-2 win over his Liberty opponent. Redshirt junior Michael Beiler won his match 6-1, 7-6 (4). In a close match against Jorge Azuero, junior Ricky Ventura won his match 6-3, 1-6, 7-6 (4). Alfonzo also won his match 3-6, 6-2, 6-2.
Rounding out singles play was Vives. He defeated Liberty’s Dillon Segur 4-6, 7-5, 6-1. With the win, Vives tied Dean Tsamas for the most wins of any FGCU tennis player with 100 wins.
On Saturday, the players defeated the No. 71 University of Miami (2-4) 4-1. It was the first time in program history that the team beat a nationally ranked opponent.
“It was a huge win for us,” Bao said. “I’m a senior and I have been here for four years. Since my first year no other school respected us the way they should. But now that we beat Miami, I don’t think any team will overlook us anymore. We are getting the results we deserve.”
Weber also coached at the University of Miami before he came to FGCU. The win meant a lot not only to the program but to him as well.
“It was special because Miami is a good opponent,” Weber said. “We tried to not focus on who we were going to play but how we were going to be as tennis players.”
The team started off losing the doubles point but did not let the loss deter them in singles play. Ventura set the tone with a dominating 6-1, 6-0 win over UM’s Bernard Tefel to tie the match.
“Once singles started it was crazy,” Weber said. “There was no point in time where we felt we were going to lose.” To do that against a good team is huge. We stayed aggressive and stayed on top.
Bao defeated his competitor 6-3, 6-3 and Vives defeated No. 56 Piotr Lomacki 6-4, 7-5. Clinching the win for the team was Andres Alfonzo. Out of the five wins the team has had this season, Alfonzo has clinched three of them by winning his matches, according to Weber.
With the win over Lomacki, Vives became the FGCU tennis player with the most wins in program history. He won 63 singles matches, with a total number of 101 wins. Considering Vives has been at FGCU for two years and was out in the fall due to an injury, Weber said the accomplishment was an “incredible feat.”
Despite the success of this past weekend, the team is continuing to fine tune their games for the matches coming up.
“It is easy to be very motivated right now because we beat Miami, a nationally ranked team,” Bao said. “But, it is easy to overlook the teams we beat before so we just need to focus on ourselves and prepare like we did for Miami. Hopefully the results will go along with that.”