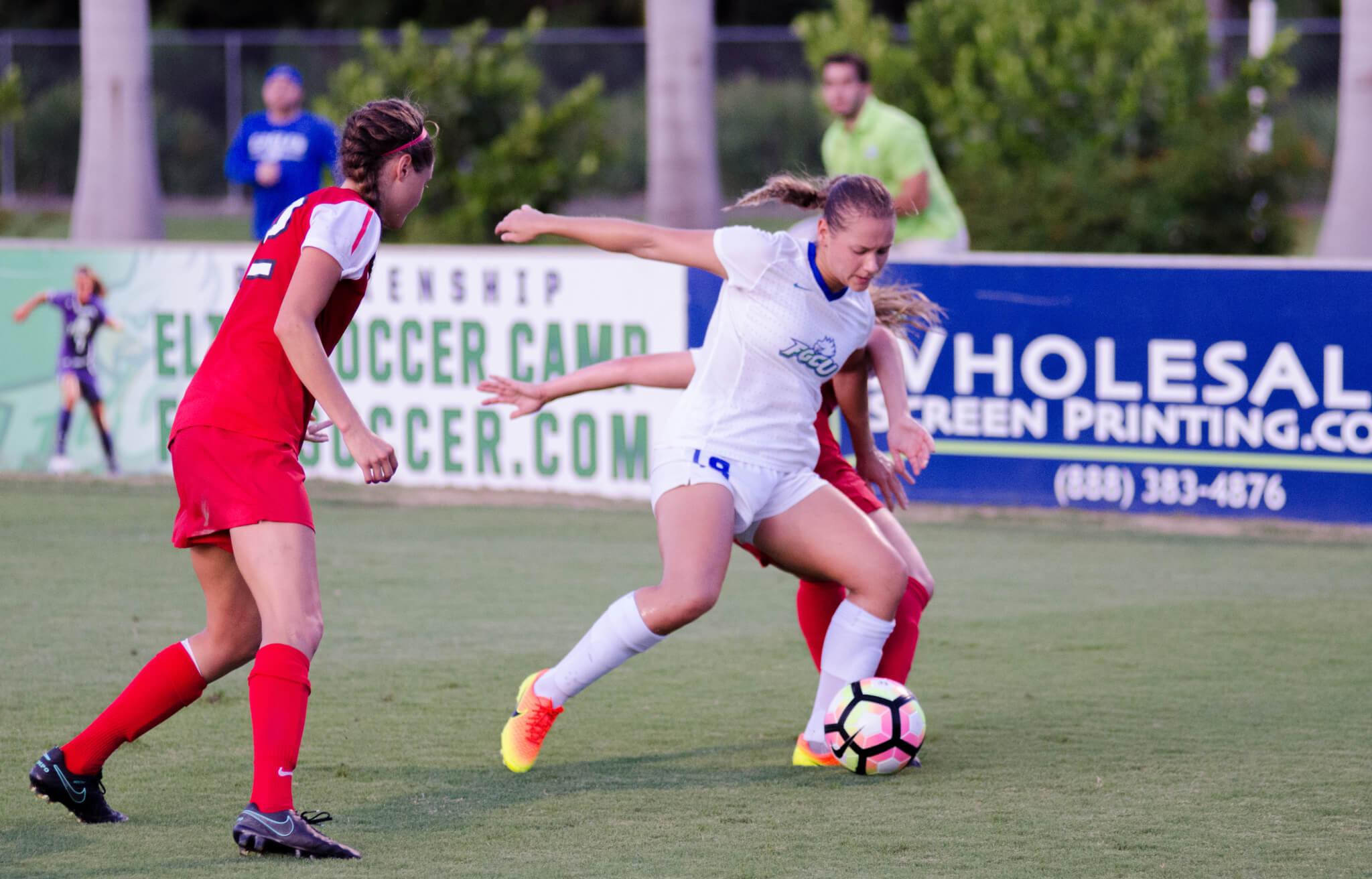 After lightning and rain kept the FGCU women’s soccer team from facing No. 9 North Carolina on Friday, the Eagles fell to No. 21 Ohio State 1-0 in double overtime in the team’s home opener.

“It was a tough way to go down,” FGCU head coach Jim Blankenship said. “I was real pleased with the way we played, and we had multiple chances to put the game away. But, they ultimately came up with the big chance to put it away.”

In the third minute of the game, it seemed like FGCU would grab an early lead when a Buckeyes’ misdirected header landed at the feet of Tabby Tindell, but her effort on goal was met by the hands of Jillian McVicker.

“We always say before the game the first five minutes of the half are the most important,” Tindell said. “That’s where we set the tone for the first half, and we are really going to be working on getting that goal in the first five to put the other team on their heels instead of the other way around.”

As the offense started to pick up on both ends of the pitch, the Buckeyes began gaining momentum, earning three corner kicks and two shots on goal but were unable to capitalize on their early opportunities thanks to heroics by Melissa Weck.

Continuing to trade blows on the offensive side of the ball, Tindell almost broke the deadlock again for FGCU after she dummied the ball from a pass by Ali Rodgers to see her near-post shot saved my McVicker once again.

Goalkeeping proved to be the key in the first half with both keepers combining for four saves to keep the score leveled at one a piece going into the half.

With the second half came a major shift in intensity — for the first 25 minutes at least — with both teams failing to hold possession for very long.

The Eagles continued to have chances with their best opportunity of the game coming in the 66th min after Tindell took on a defender in the box, crossing the ball to Meaghan Mulligan who hit the ball just over the crossbar.

In the last 20 minutes, both teams came alive, filling the complex with intensity you could feel from the parking lot. Both teams turned up the pressure once again on the offensive end, combining for five corner kicks, but they were continuously met by the heroics of both keepers between the sticks.

With things beginning to get physical on the pitch as the time winded closer to the 90, the teams combined for a total of 15 fouls in the second half but were still unable to find the back of the net, leaving the game to be decided in two 10-minute golden goal periods of overtime.

The first ten minutes of the overtime period showed fatigue and more opportunities on both sides of the ball, but the story continued of neither team being able to find the back of the net.

Toward the end of the first period of overtime, the Buckeyes seemed to gain momentum, which they carried into the second half of extra time.

With just 2:51 seconds remaining on the clock, a cleared FGCU corner kick led to a rapid Ohio State counter attack. Nichelle Prince took the ball down the right flank, blowing by an FGCU defender and completing her run by crossing the ball to Haley Walker-Robinson, who hit the ball home, giving the Buckeyes a triumphant victory on the road.

“I loved the way our guys played in the second half and both overtimes,” Blankenship said. “We controlled play, had it in the attacking third, but credit to them, they withstood a lot of pressure and countered.”

Despite the heroics of Walker-Robinson in the 108th minute, moving Ohio State to 4-0 on the season, the Eagles weren’t able to use their 11-8 shot advantage to find the back of the net in the attacking third, as they fall to 1-2-0 on the season.

“We are one and two; we have a lot to work on,” Blankenship said. “I think we’ll get better as the year goes on. We will break down tape and see what we need to work on, but I like the way we are playing. I like the level we are playing at, and we just got to finish some of these chances when we get into the box.”