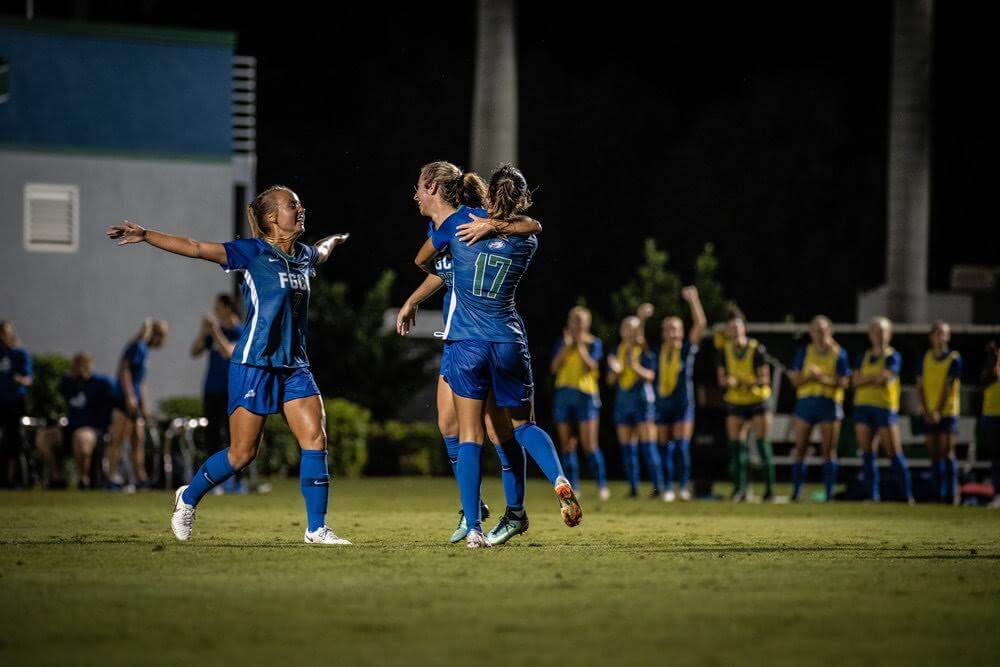 By Kyle Grosskopf and Emily Kois

The FGCU women’s soccer earns a 3-0 victory over Niagara in the first of two games this weekend.

Defense was prominent early on, as only three shots were taken in the first 24 minutes of play. However, in the 25th minute of play Holly Fritz put the Eagles on the scoreboard with a shot just outside the box.

In the first half, each side put two shots on net. Most of the first half was played in the middle of the pitch as neither team could start any quality chances.

Early in the second half, Fritz narrowly missed another goal opportunity, but couldn’t capitalize on a chance from the corner.

Moments later, Silvana Gordon and Shay Jackson were able to put together a play. On a cross from Jackson to Popadinova, Evdokia Popadinova was able to score her third goal of season and give the Eagles a 2-0 advantage.

FGCU kept the pace of play up on Niagara by taking more and more chances on goal as the game approached the 70th minute mark.

The Eagles scored the final goal of the game when junior Opal Curless was able to send the ball upfield to connect with Jackson at the top of the box, who then gave a header pass to Gordon at point blank range.

Niagara kept fighting offensively until the clock ran out of time, eventually finding an attack point and getting three shots off. One shot hit the crossbar while the other two sailed over the goal. The Eagles had a clean sheet victory 3-0.

Goalkeeper Melissa Weck recorded her 21st career shutout after making a pair of saves from the only two on goal shots that she saw.

The Eagles held the shot advantage to 13-9 while putting six of the shots on net compared to the Purple Eagles’ two shots.