A first-time politician and her doomed campaign 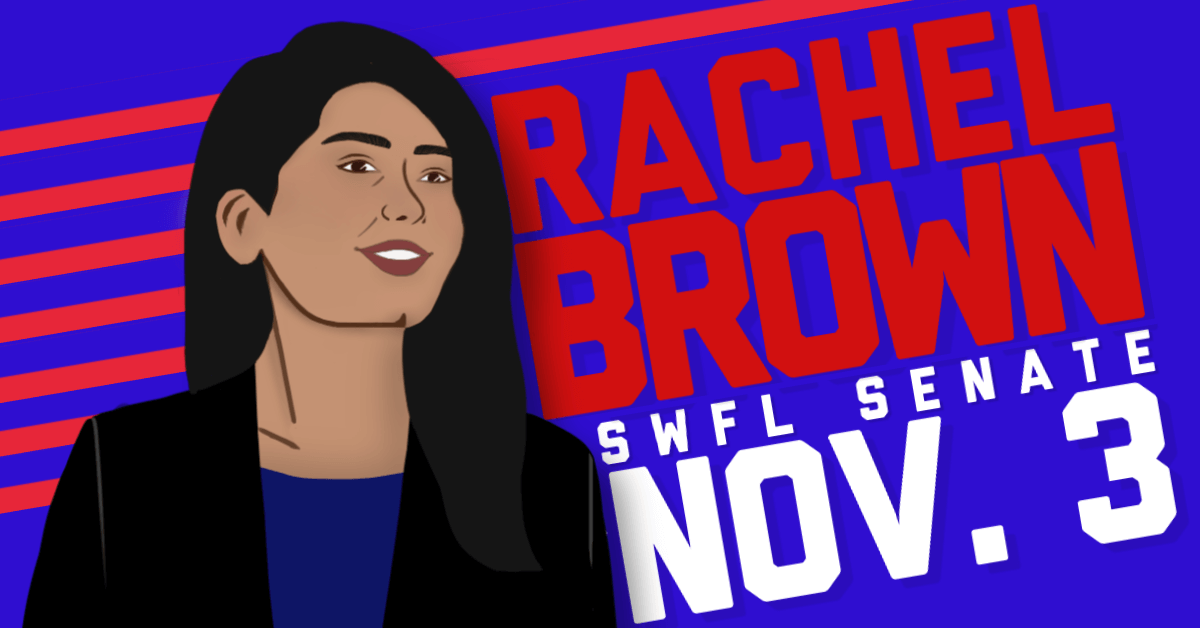 Rachel Brown always planned to enter politics, but she did not expect to do so before she had even finished college.

Brown, 26, is a lifelong Florida resident who seems to care about everything. She is as quick to discuss the environment as she is to talk about health care, transportation and human trafficking.

Brown was about eight classes away from her bachelor’s degree in environmental engineering when she was approached about running for the Florida Senate.

At a voter registration event in Fort Myers, Brown met Janelle Christensen, chair of the Democratic Environmental Caucus of Florida.

Soon after, Christensen joined a movement in the Florida Democratic party to place a candidate in every state race. She struggled to find candidates in Lee County and reached out to Brown for the District 27 Senate race.

Brown agreed to run, took a gap semester, and dove head-first into campaigning.

Brown had a difficult race. She faced-off against Ray Rodrigues, a long-time politician with a strong base of support in the community.

“There’s a lot of people who are just too afraid to run against an entrenched politician like Ray Rodrigues,” Christensen said. “But [Rachel] is fearless, she has energy. She’s smart, and she’s willing to take this on.”

This campaign was Brown’s first foray into politics, and while she was undeniably passionate, she admitted that she struggled.

“I’m battling against a very powerful man,” Brown said. “It is insanely difficult.”

Brown said that she had trouble getting the word out about her campaign with so few resources. She collected just over $10,000 in campaign funds, while Rodrigues raised over $2 million.

“When I learned about my opponent and that nobody was going up against him,” Brown said, “I knew that I should.”

Ray Rodrigues has spent the past eight years in the Florida House of Representatives, and he decided to run for the Florida Senate seat after he reached his term limit in the House. He secured the Republican nomination after defeating Heather Fitzenhagen by more than 30,000 votes in the primaries.

Rodrigues’ experience shows in his bearing. He chooses his words carefully and manages to come off as both soft-spoken and confident.

Christensen acknowledged that experience was a factor in this race, but she rejected the notion that Rodrigues’ polish was a sign of his fitness for the job.

Ray Rodrigues said that he believed the efforts of the Democratic Party to place a Democrat in every race would bring them more harm than good.

“I actually think [it] will backfire,” Rodrigues said before the election. “I think we’re going to see a greater Republican turnout statewide in Florida because of this effort.”

Christensen said she could not imagine this strategy hurting the party. Regardless of whether these efforts increased Republican turnout, Democratic turnout is at a high, she said, citing Collier, Lee and Sumpter counties. She also said that while the Republicans were ahead in raw numbers, the energy Democrats had was much greater.

“He can say whatever he wants to make himself feel better,” Christensen said.

There is no way to know whether having more Democrats run impacted the election. Florida stayed red in this election, and Rodrigues won the Florida Senate seat in Lee County.

Rodrigues won the District 27 seat on the Florida Senate with 60.5% of the votes.

For Brown, this campaign was about simply giving Democrats a candidate to vote for, even though she said she knew she was not likely to win.

Christensen said that Brown’s primary job was to speak to the issues and mobilize local Democrats to vote in the election.

“Regardless of whether she gets the seat or not,” Christensen said, “if she’s communicated the issues to the community, then it’s a success.”