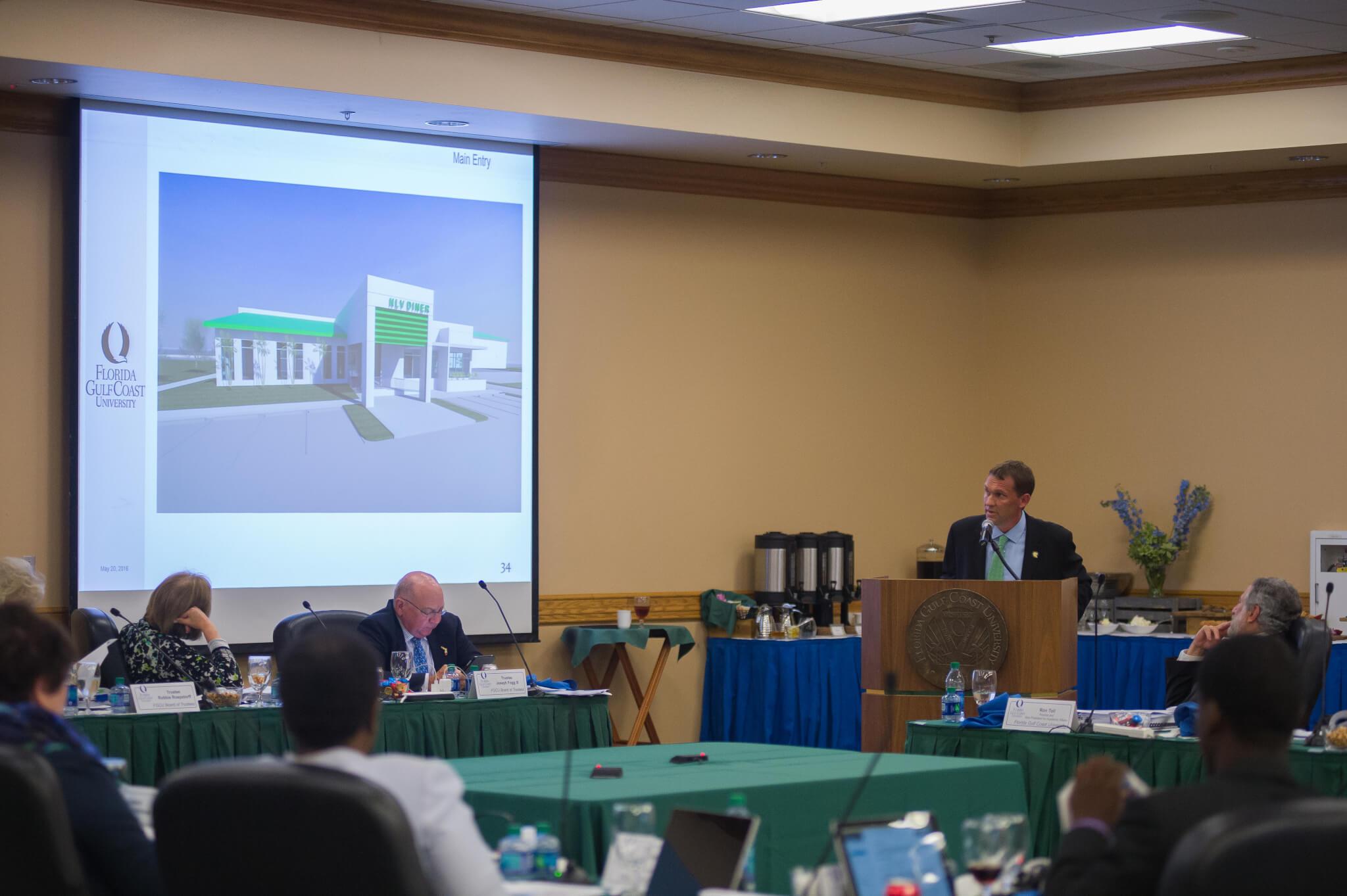 North Lake Village, FGCU’s oldest on-campus housing complex, will be renovated for the first time in over 10 years with approval from the Board of Trustees.

Director of Housing Brian Fisher presented the plans from FGCU Financing Corporation Board of Directors to enhance NLV, which was last renovated in 2004, during the Tuesday, Sept. 13,  BOT meeting.

“Our proposal is to take these spaces and to enhance them significantly,” Fisher said.

NLV, which currently houses 1,956 students, will undergo an approximate $7.7 million renovation, starting in October 2016, once approval is found. New amenities will include a boardwalk that will be built along the waterfront that will connect Building R, the western-most residence hall, to the Campus Recreation Waterfront Facility along with an 8,000-square-foot, one-story dining hall and an event lawn that will be located adjacent to the dining facility.

“This is really the main space we’re looking to enhance,” Fisher said. “We’ll have a major event lawn with a large pavilion.”

The dining hall will serve pizza, wings and burgers and will include a gelato ice cream station.

“We’re looking at a lot of comfort food,” Fisher said. “We’re looking for this to be a place that really gives students, faculty and staff a place to come and hang out.”

Fisher also anticipates the dining facility to include a “We Proudly Brew,” a smaller version of the Starbucks located in the library.

“A lot of the elements we’re capturing in this project will be mirrored on other primary spots on campus, so we will begin to really develop this FGCU feel that we’ve started at the lake front,” Fisher said.

During the meeting, Fisher stated that he has been working on the renovation plan for 18 months with a number of departments on campus.

After finishing the presentation, Fisher was asked by BOT chair Dudley Goodlette if these renovations will disturb the students who currently live in North Lake.

“It will have an impact on the space that the students do get to use, but this is not uncommon for this university,” Fisher said. “We’ve built a lot of projects in and around our residential students over the years I’ve been actively involved; we will fully be able to do that.”

To accommodate to the lives of students living on campus, Fisher said that construction will begin and finish later than construction companies are used to.

The renovations are scheduled to be completed by the summer 2017 term, either in June or July.

Student body president Thieldens Elneus said that these enhancements to North Lake Village will help the university grow in the future.

“It sets up the pace for the future of our campus, and in the long run, I foresee this being one of the key things that influences our student recruitment,” Elneus said.