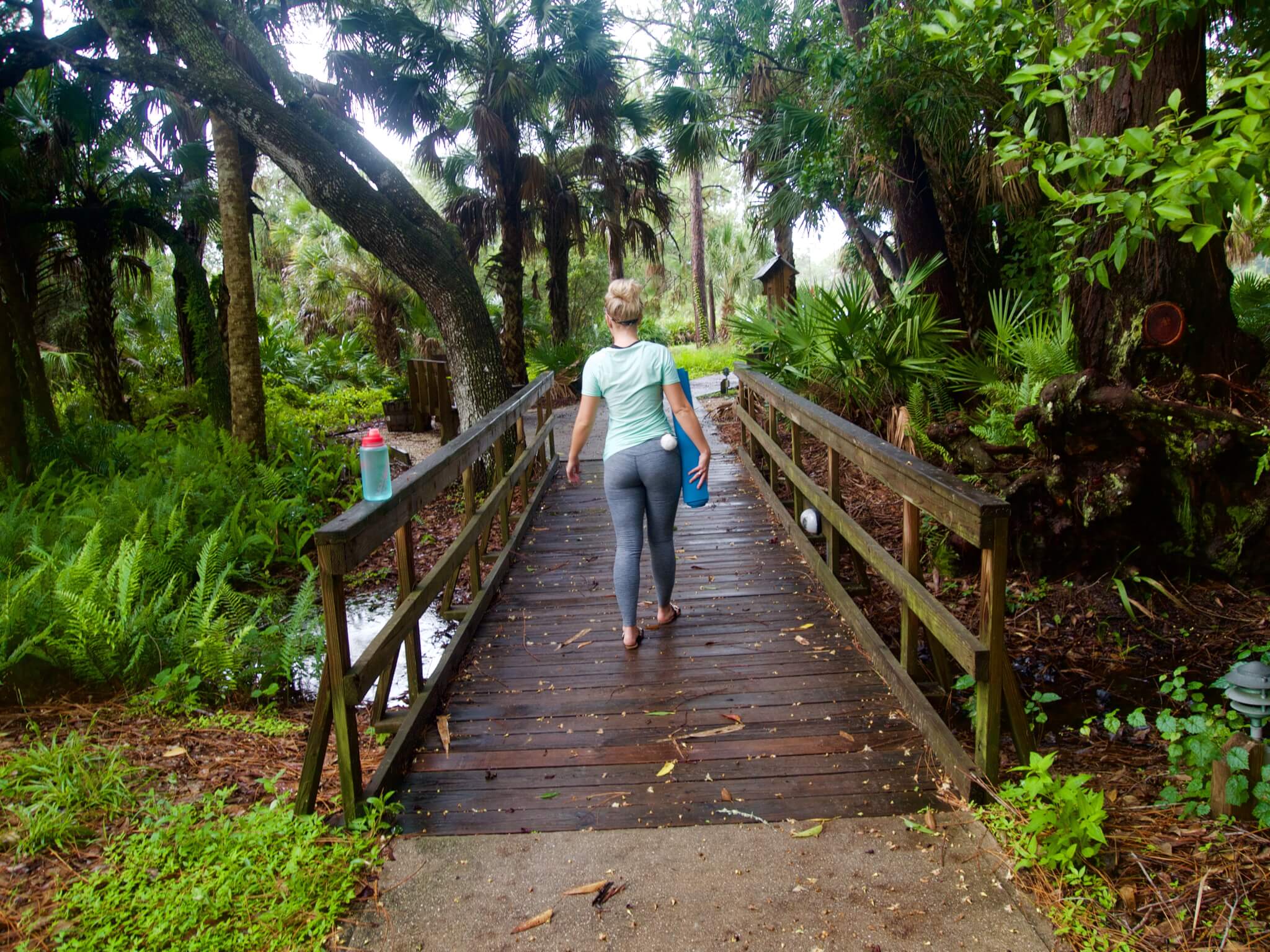 A deep “om” vibrates off the walls of the historic building as you’re guided through the breathing exercise. With eyes gently closed, palms resting upward and deep breaths entering and departing from your chest like an ocean tide, you can’t help but begin to relax.

Goddess Yoga, held at Koreshan State Historic Site from 8:30 to 9:15 every Thursday, is an intermediate yoga practice that incorporates the mythology and teachings of four Hindu goddesses. The class is taught by business-woman-turned-yogi Geva Salerno.

Ordinarily, the class is held on one of Koreshan’s many sprawling fields. However, with the sky being dark and heavy overhead, we dragged our yoga mats into the Art Hall, a building that has been there for hundreds of years.

As Geva Salerno, the co-founder of Creative Wellness Programs and certified yoga instructor, guides you through the practice, she encourages you to bring the spiritual teachings of the goddesses into your everyday life.

We quickly learned that “om” was more than just a funny sound people made, it was an important part of connecting with one another before we began our practice.

“The purpose of ‘om’ is that it is a sound that unites all things,” Salerno said, before instructing us to “om” along with her. “When we do oms we get into the same vibration.”

Before we began twisting into our goddess yoga poses, Salerno told us a bit about why she created goddess yoga and how it affects the mind and body differently than traditional yoga practices.

“A lot of times when people are interested in goddesses or gods in yoga or in Hinduism, it’s a very devotional and emotional practice,” Salerno said. “That is fine in and of itself, but for me, I come from a different part of yoga called Jnana yoga.”

Jnana yoga is yoga that incorporates wisdom or knowledge and is meant to be more of a philosophical practice rather than a religious or physical one. With this in mind, Salerno began to explain the philosophical adaptation that gave life to her goddess yoga.

“People developed mythology around gods and goddesses for two reasons,” Salerno said. “One was to have this powerful being outside of ourselves that would allow us to feel like there’s something in charge that we can count on, something more powerful. It brings a sense of psychological relief. The other is to teach stories about really important concepts.”

The first goddess presented to us was Lakshmi, the goddess of wealth and prosperity. The picture framed at the head of the class illustrated her gracefully posed on a pink lotus. According to the myth, she rose out of the lotus in order to deliver wealth and riches to those morally worthy of them.

“What I think is even more powerful than having something outside of ourselves, is if we can learn from it and bring it inside ourselves,” Salerno said. “So, that’s what we do here in goddess yoga; we incorporate different movements that can help us embody the concepts.”

As we stretched our bodies into the sphinx pose and opened up our chest muscles, we visualized Lakshmi and willed our souls to be virtuous so that prosperity would enter our lives.

Once we got off the floor and stretched our legs out of their pretzel-like position, we began to learn about the next goddess.

Kali is a fiery goddess.

“What I love about the mythology is that women are pictured in more than one way,” Salerno said. “We don’t have to be sweet and lovely all the time; we can show our fiery side.”

In the photo, Kali looks like a wild murderess. She wears a garland of heads around her neck and a skirt made of human arms. But, rather than demonstrating destruction, this is meant to demonstrate the attachment people have to the body.

“We think we are the body,” Salerno said. “We are under the illusion we are separate. She’s about separating people from their attachments.”

Before we leaned into our sun salutations and began working up a sweat, she told the story of Parvati, the mother goddess.

“Parvati is the goddess of love and devotion,” she said. “She is the ideal wife and mother, but she can take on personalities of all the other goddesses, even Kali.”

As we steadied into the tree pose and fought to keep our balance, she spoke of the goddess of creativity. Sarasvati is shown with a musical instrument, sitting next to a swan.

“People pray to her because she helps bring creative energies and the deep desires you have in front of you and out into the world,” Salerno said. “She helped people birth their wonderful visions into concrete things.”

Finally, Salerno led us through a guided meditation in which we laid on the floor, closed our eyes and fell into a deep trance, colored with images of goddesses bringing energy to the world.

Geva Salerno and her creative path of teaching goddess yoga has made a lasting impression on those who’ve experienced it.

It was Norma Zambrano’s first time doing yoga when she tried the goddess yoga class.

“Some of the goddess stuff was kind of out there,” Zambrano said with a laugh. But, overall, she said the class was a great experience.

“The instructor was really friendly,” she said. “And, it did feel relaxing. I think it impacted my life positively.”

Overall, the class was both enlightening and informative. It taught mythology that is typically unheard of and added an extra element to the typical yoga class. If you’re looking for a way to stretch both your body and your mind, goddess yoga may be what you’re seeking.